Study with the 11 questions of 1st and 2nd degree inequalities. Clear your doubts with the solved exercises and prepare yourself with university entrance exams.

A homeware store offers a set of cutlery for a price that depends on the quantity purchased. These are the options:

From how many single cutlery purchased, option A is less advantageous than option B.

Idea 1: write the final price functions in relation to the amount of cutlery purchased.

Where, PA is the final price of option A and n is the number of single cutlery.

Where, PB is the final price of option B and n is the number of single cutlery.

As the condition is that A is less advantageous, let's write the inequality using the sign "greater than", which will represent the number of cutlery after which this option becomes more expensive.

Isolating n from the left side of the inequality and the numerical values ​​from the right side.

Carlos is negotiating land with a real estate agent. Land A, is on a corner and has the shape of a triangle. The real estate company is also negotiating a strip of land in the shape of a rectangle determined by the following condition: the customer can choose the width, but the length must be five times this measure. 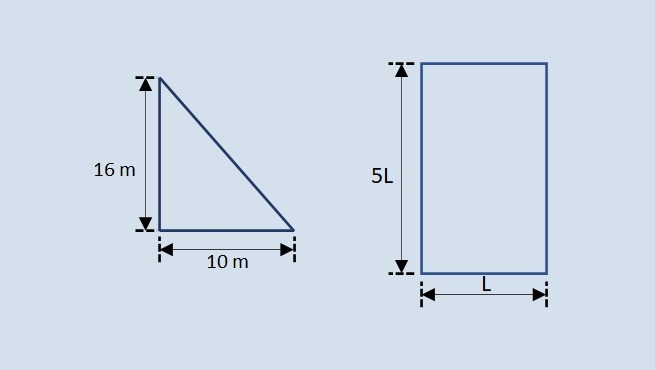 The area of ​​the triangle is equal to the measure of the base multiplied by the height, divided by two.

Idea 2: rectangular terrain area as a function of width measurement.

Idea 3: inequality comparing the measurements of terrains A and B.

Conclusion
Terrain A, rectangular, has a larger area than terrain B, triangular, for widths greater than 4 meters.

Idea 1: write wage formulas as a function of the number of cars sold for options 1 and 2.

Where n is the number of cars sold.

represents, in hours, the time interval of action of a given drug as a function of time, from the moment a patient ingests it. The drug remains efficient for positive function values.
What is the time interval in which the medicine reacts in the patient's body?

To determine the time interval, we plot the function

This is a function of the second degree and its curve is a parabola.

As a is negative, the concavity is turned downwards.

Determining the roots of the equation: 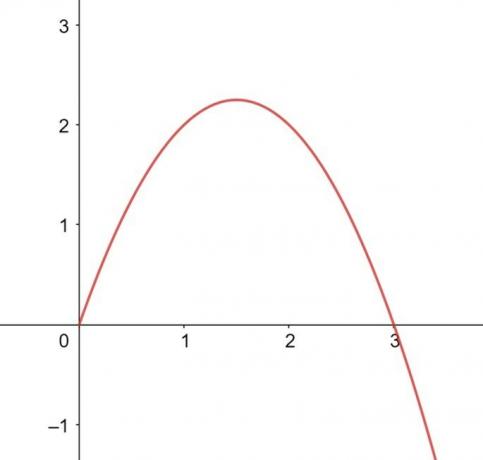 The function takes positive values ​​between 0 and 3.
Therefore, the drug maintains its effect for three hours.

In a clothing store, a promotion says that if a customer buys one item, he can get a second one, just like the first, for a third of the price. If a customer has BRL 125.00 and wants to take advantage of the promotion, the maximum price of the first piece he can buy, so that he can also take the second, is

Calling the price of the first piece x, the second comes out by x / 3. Since the two together should cost a maximum of R$125.00, we write an inequality using the sign "less than or equal to".

Therefore, the maximum price she can pay for the first piece is R$93.75.

In fact, if x assumes its maximum value of 93.75, the second piece will come out for a third of this value, that is:

To check the calculations, let's add up the prices for the first and second part.

As the votes of the equity partners will remain the same, for slate 2 to win the election, it must win x votes from the contributing partners. At the same time, slate 1 must lose those same x votes.

Therefore, 753 is the smallest number of contributing partners who need to change their vote from slate I to slate II for this to be the winner.

(UERJ 2020). A positive integer N that satisfies the inequality

As the coefficient a is positive, the curve of the function has an open concavity upwards and cuts the x axis at points N1 and N2.

It is easy to see that the function takes values ​​greater than zero for N less than 1 and greater than 16. 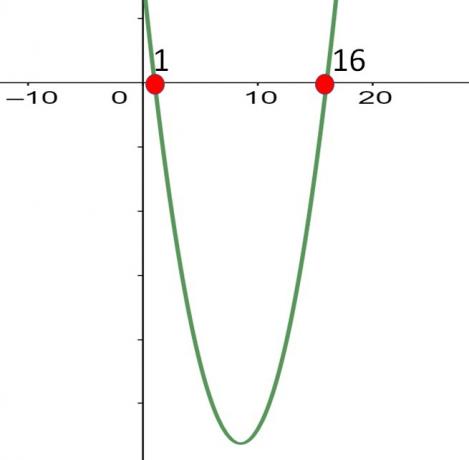 Conclusion
The integer among the options that satisfies the inequality is 17.

If we wanted to know in how many hours the price of their service equals, we would need to equalize the equations.

How do we want the price of Daniel's service don't get more expensive than Carlos, we change the equals sign for the less than or equal to

(inequality of the 1st degree)

Isolating the term with h on one side of the inequality:

For values ​​of h = 3, the service price value equals for both.

The statement says: "so that the hiring of Daniel does not become more expensive than that of Carlos". That's why we use the less than or equal to sign.

The maximum duration of a party, so that Daniel's hiring doesn't become more expensive than Carlos', is 3 hours. From 3 am onwards, its hiring becomes more expensive.

Considering the functions FT(q) = 5q and CT(q) = 2q + 12 as revenue and cost, what is the minimum quantity of products that the industry will have to manufacture in order not to have a loss?

Idea 1: not having a loss is the same as having a higher turnover or, at least, equal to zero.

Idea 2: write the inequality and calculate.

According to the statement LT(q) = FT(q) - CT(q). Substituting functions and making greater than or equal to zero.

Therefore, the minimum quantity of products that the industry will have to manufacture in order not to lose is 4.

(ENEM 2015). Insulin is used in the treatment of patients with diabetes for glycemic control. To facilitate its application, a "pen" was developed in which a refill containing 3mL of insulin can be inserted. To control the applications, the insulin unit was defined as 0.01 mL. Before each application, it is necessary to discard 2 units of insulin, in order to remove possible air bubbles. One patient was prescribed two daily applications: 10 units of insulin in the morning and 10 in the evening. What is the maximum number of applications per refill that the patient can use with the prescribed dosage?

Objective: To determine the maximum number of applications possible with the prescribed dosage.

Conclusion
The maximum number of applications per refill that the patient can use with the prescribed dosage is 25.

(UECE 2010). Paul's age, in years, is an even integer that satisfies the inequality

. The number representing Paul's age belongs to the set

Idea 1: sketch the graph curve of the function f (x) =

For this, let's determine the roots of the function using Bhaskara's formula.

The graph of a 2nd degree function is a parabola, as a is positive the concavity faces up and the curve cuts the x-axis at points 14 and 18. 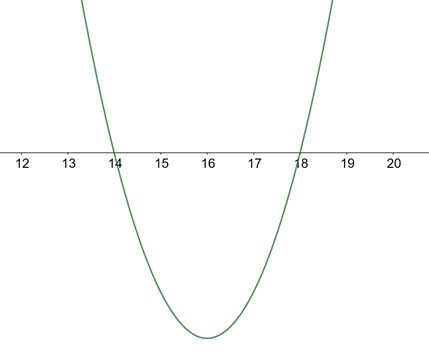 Idea 2: Identify the values ​​on the chart.

As the inequality of the question is an inequality with a sign "less than", with the value zero on the right side, we are interested in the values ​​of the x axis so that the function is negative.

Alternative b) Students and I talked about the importance of rigorous study and organization. Cor...

Test your knowledge with the following questions about Earth's motions. Also check the comments a...

Correct answer: 3/9.The period, the part that repeats after the comma, is 3. Thus, the decimal ca...