Cell division is a process in which one cell, called a mother cell, divides and gives rise to another, called a daughter cell. At mitosis, a cell divides into two diploid daughter cells, and in the meiosis, the end of the process generates four haploid cells. Meiosis is, therefore, a process of reductive division.

Meiosis starts after the doubling of chromosomes, which occurs at the so-called interphase. After this duplication, the first of the two divisions that will take place in this process of cell division begins. 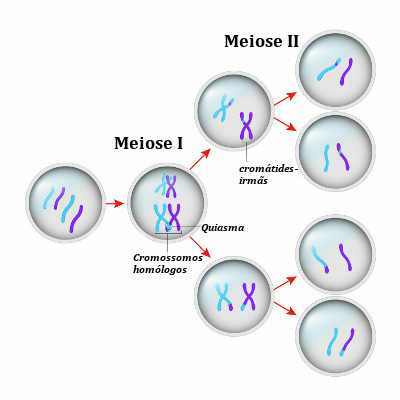 Note a representation of the meiosis process

→ Meiosis function for animals and plants

This cell division process is very important for animals and plants because, in these groups, it is related to gamete production or from spores (in plants). By reducing the number of chromosomes by half, this process guarantees, after fertilization, the reestablishment of the number of chromosomes in a species. In addition, meiosis makes genetic variability possible.

Layers of the Earth. Earth Structure and Layers

The internal structure of the Earth, that is, the entire composition of the planet formed by the ...

We brought another post from the series of practical, easy, healthy and delicious recipes and the...

The boil is a infection of the follicles of the cavities where the hairs come out (pilosebaceous)...