Polynomials: what they are, how to solve, examples

We know how polynomial an expression that indicates the algebraic sum of monomials that are not similar, that is, polynomial is one algebraic expression between monomials. Monomium is an algebraic term that has a coefficient and a literal part.

When there are similar terms between the polynomials, it is possible to perform the reduction of its terms in addition and/or subtraction of two polynomials. It is also possible to multiply two polynomials through the distributive property. The division is performed using the keys method.

Read too: Polynomial Equation - Equation characterized by having a polynomial equal to 0

What is a polynomial?

A polynomial is nothing but the algebraic sum of monomials, that is, they are more monomials separated by addition or subtraction from each other.

Generally speaking, a polynomial can have several terms, it is represented algebraically by:

See too: What are the classes of polynomials?

degree of a polynomial

It is quite common to work with a polynomial that has only one variable. When that happens, O greater monomium degree which indicates the degree of the polynomial is equal to the largest exponent of the variable:

Analyzing the literal part of each term, we have to:

Note that the largest term has degree 5, so this is a degree 5 polynomial.

Analyzing the literal part of each monomium:

Thus, the polynomial has degree 4.

To the addition between two polynomials, let's carry out the reduction of similar monomials. Two monomials are similar if they have equal literal parts. When this happens, it is possible to simplify the polynomial.

Finding similar terms (which have the same literal parts):

Subtraction is not much different from addition. The important detail is that first we need to write the opposite polynomial before we carry out the simplification of similar terms.

Then we will calculate:

Applying the distributive property, we will have:

Now, if they exist, we can simplify similar terms:

Note that the only similar monomials are highlighted in orange, simplifying between them, we will have the following polynomial as an answer:

2nd step: we multiply 5x · (3x+1) = 15x² + 5x, and subtract the result of P(x). To perform the subtraction, it is necessary to invert the signs of the multiplication result, finding the polynomial: 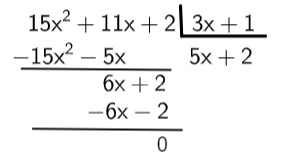 Therefore, we have to:

So we will do:

Question 2 - (IFMA 2017) The perimeter of the figure can be written by the polynomial:

From the image, when we analyze the given length and width, we know that the perimeter is the sum of all sides. Since the length and height are the same, we just multiply the sum of the given polynomials by 2.

The Child and the Whys Phase

Around three and four years of age, the child awakens to the curiosity to understand how things h... Joaquim José da Silva Xavier, also known by the nickname “Tiradentes”, was consecrated for its ac...

Fuel is defined as any body whose chemical combination with another is exothermic. Based on their...