Cerrado, a risk of extinction in Goiás. Cerrado devastation

O thick it is one of the main biomes in the country, occupies about 22% of the entire territory, but suffers from the constant threat of extinction, this forecast pessimistic comes from the current environmental situation in which the cerrado is located, in which approximately 80% of the biodiversity has already suffered changes in fauna and flora, in Goiás the situation is more aggravating as estimates show that around 90% of the entire biome is already present. changed.
In Goiás, conservation parks represent only 1% of the entire cerrado in Goiás, while in other states the average is 2.5%, these data are far below the international targets, which is 10%, this percentage should be reverted to environmental reserves in Goiás. 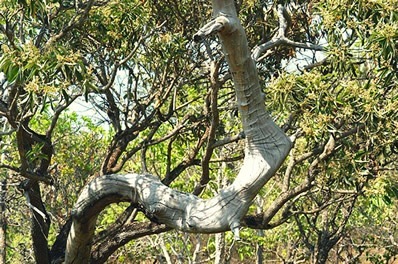 The vegetation in the cerrado is generally small, with twisted branches and thick leaves.¹

For several decades the cerrado was seen as unsuitable for agricultural occupation, therefore economically unfeasible. soil characteristics, very acidic because of the high concentration of aluminum hydroxide and the type of vegetation, of low trees and bushes.

However, later, around the 70s, the intense mechanization and modernization of the field and the introduction of cultures destined for export (monocultures) caused an intense change in the geographic space of the thick. According to data from the WWF (World Wide Foundation), about 60% of the cerrado in Goiás has already been removed, giving way to pastures, 6% have been for agriculture, 14% for urban occupation and road construction, only 19% of the cerrado is found. preserved. The environmental devastation in the cerrado due to lack of forest management and other measures raises concerns about the risk of restoration becoming irreversible.

What must be done in the region is the implementation of preservation and conservation measures, rethinking the model of development and creating economic policies that reconcile prosperity, financial growth and preservation (development sustainable).
The anthropic action is the modifying agent of the cerrado landscapes, the constant destruction of the biome causes the extinction of animals, plants and the growth of the number of erosions. The main action is agriculture, which each year opens up more areas for cultivation, removing the cover of the cerrado, gradually eliminating the biome.

The cerrado is an extremely rich biome in fauna, flora, in addition to presenting water potential, many species of animals and plants are not yet known or not have been catalogued, however, it is known that 837 species of birds, 197 of mammals, 180 of reptiles, 113 of amphibians and a multitude of insects are identified. many different. The cerrado is also a watershed, it has a large amount of surface and underground water.

The role of oblique pronouns as verbal complementation

When we talk about pronouns, we refer to the idea of a term that accompanies or replaces the nam...

Becoming independent on August 9, 1965, Singapore is located on the largest island in a archipela...

Political philosophy: what is it, history, thinkers