São Paulo is a Brazilian municipality and capital of the state of the same name, located in Southeast region from the country. The city is considered a global metropolis, being the most populous in Brazil and one of the largest in the world, with more than 12 million inhabitants. The tertiary sector plays a central role in the economy of the municipality, which is the main financial center in the country.

Read too: What are the capitals of Brazilian states?

Summary about the city of São Paulo

General data for the city of São Paulo

See too: Belo Horizonte – capital of Minas Gerais and one of the most populous cities in Brazil

Geography of the city of São Paulo

São Paulo is a Brazilian city and capital of the state of the same name, located in the Southeast region of the country. It is also located in the southeast portion of the federative unit, extending over an area of ​​1,521 km². The capital of São Paulo borders other 23 municipalities, forming the Metropolitan Region of São Paulo, which is made up of 39 municipalities.

Due to the wide influence it exerts nationally and internationally, the city is categorized as being a metropolis global. In addition, the great expansion of the urban fabric that took place in the region of São Paulo formed, along with the city of Rio de Janeiro and other municipalities located in the area of ​​influence of these capitals, which we call megalopolis.

The predominant climate in São Paulo is the humid subtropical, although the city is known for its great daily variation in time and for the numerous microclimates identified in different points of its territory. You winters tend to be cold and dry, and the summers they are hot and rainy, with temperatures ranging from 16 ºC to 25 ºC, on average, and rainfall volume from 1,500 to 1,800 mm per year.

the city is located in the geomorphological domain of the Planalto Paulistano, being composed of uneven terrain, where one can observe the presence of flat features close to the course of rivers (alluvial plains), as well as hills and mountains, such as the Serra da Cantareira. Among the highest points in the city is Pico do Jaraguá, at 1,135 meters of altitude.

São Paulo integrates the biome Atlantic forest. Due to its high degree of urbanization, forest formations are observed in some parts of the city, concentrating on the southern portions and northern stretches. The city also has parks and green areas with secondary vegetation.

the rivers tiete and Pinheiros are the two main water courses that run through the city of São Paulo. Both had their course intensely modified by the process of urbanization. Also noteworthy are the Tamanduateí, Aricanduva, Embu-Guaçu rivers, in addition to streams.

Demographics of the city of São Paulo

São Paulo is the most populous city in Brazil. According to the latest data from the IBGE, the capital of São Paulo concentrates 12,325,232 inhabitants, almost twice as much as the second largest city in the country, which is Rio de Janeiro. The population of São Paulo corresponds to 26.6% of all residents of the state and a little more than half of the population of Greater São Paulo, which today is greater than 21 million inhabitants.

In addition to being populous, São Paulo is also a densely populated city. IBGE calculates that, in 2010, the demographic density of the municipality was 7,398.26 inhab./km², which was equivalent to the sixth highest value in the state. Almost all residents of the capital of São Paulo lived in the urban area of ​​the municipality, with less than 1% of the population, or 101,000 inhabitants, living in the rural area. Most of these residents are concentrated in the southern region of São Paulo. The largest district in the city, Grajaú, has more than 387,000 inhabitants and is also located in the South Zone of the city.

A striking aspect of the demography paulistana is the gradual aging through which its population has been passing. Currently, the age groups that concentrate the largest population are from 30 to 34 and 35 to 39 years old. The average life expectancy in the capital is 70.56 years, with a big difference between the central districts and the periphery, where life expectancy at birth can be lower.

Check out our podcast: Aging population and economy

Geographical division of the city of São Paulo

The city of São Paulo is divided into geographic regions that take into account its position. Although there are subdivisions that can have administrative and urban planning purposes, they are commonly referred to as the North, South, East and West Zones.

The administrative division of São Paulo, in turn, takes place through 96 districts. These districts are in charge of 32 boroughs, which are managed by the sub-mayors, a position that is filled upon nomination by the mayor of the municipality of São Paulo. The boroughs of Sé, Mooca and Lapa are the most comprehensive: the first comprises seven districts, and the others, six districts.

Economy of the city of São Paulo

São Paulo is the main economic and financial center of the country. The Gross Domestic Product (GDP) of the municipality is in the order of R$ 714.68 billion, which corresponds to 10.2% of all national wealth. In addition, the capital accounts for 32.33% of the economy of the state of São Paulo. The largest portion of the municipality's revenue is derived from the tertiary sector, which represents commerce and services. As indicated by the IBGE, disregarding the activities of public administration, the segment is responsible for 82.62% of São Paulo's GDP.

Avenida Paulista concentrates the main headquarters of multinational companies, banks and other national and international financial entities that are present in Brazil. The city of São Paulo is also home to large retail commercial centers, which attract people from all over the country to shop, whether they are consumers or merchants from other locations. As a global city, tourist activities are equally representative for the municipal economy., which focus on business tourism and cultural tourism.

O secondary sector has a smaller share in the economy of the city of São Paulo, accounting for a share of 9.88% of its GDP. Agricultural activities, in turn, represent only 0.01% of São Paulo revenues.

The government system of the city of São Paulo is representative democratic. This means that Paulistanos go to the polls every four years to elect their governors. Among them is O Mayor, who is the head of the executive branch of the municipality.. The Legislative is represented by the City Council, currently formed by 55 councilors.

As the capital of the state of São Paulo, the city is home to the seat of the São Paulo government, which is located at Palácio dos Bandeirantes.

Infrastructure of the city of São Paulo

The city of São Paulo has a extensive network of urban infrastructure and services to serve its population, who mostly live in the city's urban area. Structural and access problems to some services are identified mainly in the city's expansion areas and its poorer neighborhoods.

Data from the last IBGE census show that 92.6% of households in the city of São Paulo have access to adequate sanitary sewage, while just over 50% of them were located on adequately urbanized roads. The city's water network served 99% of households and electricity reached approximately 99.9% of them.

Several modes are used for travel between different points of the city and between cities in the metropolitan region, with emphasis on buses, subways and intercity trains. São Paulo also stands out for the implementation of cycle paths, which appear as an alternative to other modes in some parts of the city. Both the capital and its metropolitan region are home to two of the airports that are among those with the largest flow of passengers in the country, including Congonhas, in São Paulo, and Guarulhos airports.

Culture of the city of São Paulo

The city of São Paulo constitutes a true cultural mosaic, since the migrants that make up its population, originating from various parts of Brazil and the world, contribute to the culture of the city through its traditions and customs. The urban space in São Paulo portrays this diversity very well, with neighborhoods formed mostly by people of a certain nationality, such as Japanese and Italians, as well as establishments dedicated exclusively to the celebration and maintenance of their heritage cultural.

There are many museums in São Paulo, such as the famous São Paulo Art Museum (MASP), the Language Museum Portuguese, the Pinacoteca, the Museum of Image and Sound (MIS), theaters, cinemas, concert hall, libraries, parks and others various cultural centers. The city is also recognized for its numerous festivals, celebrations and the holding of major events, such as Virada Cultural.

History of the city of São Paulo

The history of the city of São Paulo started in Brazilian colonial period, more precisely in the year 1553, when the Jesuit priests José de Anchieta and Manoel da Nóbrega entered São Paulo in search of a place to settle. The selected place was on the Piratininga plateau, where a school was built whose area is currently known as Pateo do Collegio, and is located in the central region of the capital of São Paulo. On January 25, 1554, the first mass was celebrated at the site., thus marking the foundation of the then town of São Paulo de Piratininga.

Four years after its foundation, the town was elevated to the status of a town. City status was acquired in the 18th century, more precisely in 1711. During the first centuries of development, the city was the starting point of the Flags. In the 19th century, in 1815, São Paulo was transformed into the capital of the Province of São Paulo. The economic development of the capital of São Paulo, together with population growth, took shape with the coffee economy and with the industry derived from the income of that activity, in addition to the arrival of a large number of immigrants.

The 20th century was marked by the Constitutionalist Revolution of 1932 and, later, by the leap in growth and development that the municipality experienced in the following decades, culminating in the industrial deconcentration process of the 1970s. São Paulo is today the largest city in Brazil and one of the most populous in the world, being considered the country's financial center. 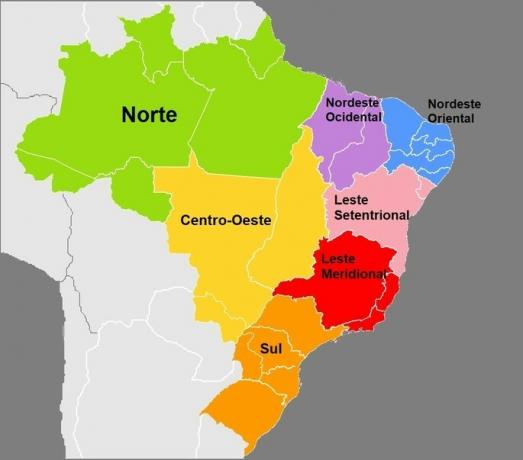 Agreste: Characteristics of the Northeast Sub-Region

O wild it is a northeastern sub-region, located between the forest zone and the sertão. In other ...