Distillation: what it is, process, applications and exercises

THE distillation is a method of separating homogeneous mixtures, that is, when the components are in a single phase.

There are two types of distillation. Simple distillation is used in solid-liquid separation and fractional distillation in a mixture of liquids that are miscible with each other.

To be able to isolate a particular component of a mixture it is necessary to modify a variable. In the case of distillation, separation occurs by changing the temperature so that the component of interest changes its physical state.

The property of the substances used in this process is the boiling point, that is, temperature at which the change from liquid to gas occurs.

The distillation process consists of supplying heat to a mixture until the boiling point of the component of interest is reached and it changes to a gaseous state, separating itself from the others.

After that, the gas passes through a cooling column, where heat will be removed from the substance until it reaches its melting point and, thus, returns to a liquid state. This material is directed to another container.

To separate a homogeneous mixture from solid dissolved in liquid simple distillation is used.

In the image below we can see the basic equipment for the separation process.

This process can be used, for example, to separate sodium chloride (NaCl), known as table salt, and water. The salt has a boiling point of 1465 °C and dissolves in water to form a homogeneous mixture.

As water has a boiling point of 100 ºC, it easily changes into a gaseous state and is separated from the mixture, while the salt crystallizes and remains in a solid state in the container.

The water vapor exits at the top of the distillation flask and passes through a condenser. Cold or cold water circulates on the walls of this equipment. The exchange of heat between the fluids causes the separated component of the mixture to lose heat and return to a liquid state to be collected in another container. This liquid is called distillate.

To separate a homogeneous mixture from liquids miscible with each other and with a large difference between boiling temperatures, fractional distillation is used.

This method is fractionated because the components are separated from the mixture in ascending order of boiling point, that is, starting with the lowest until the one that requires the highest temperature to change the phase.

In the image below, there is the equipment used to perform the method.

As in simple distillation, distillation flask (1), heating blanket (2), thermometer (4), condenser (5) and beaker (6) are used. However, the distillation or fractionation column (3) is the equipment that allows separation according to temperature.

The distillation column has a series of obstacles inside it to prevent all the components of the mixture from volatilizing at the same time.

This process is widely used to separate fractions of petroleum, which is a mixture of hydrocarbons. Some of the petroleum components and their respective boiling points (PE) are: butane (PE 20 ºC), gasoline (PE 150 ºC) and kerosene (PE 300 ºC).

Through fractional distillation, butane is the first component separated, as it has the lowest boiling point, then gasoline, with an intermediate boiling point, and finally kerosene.

Distillation is widely used in industries, as many mixtures undergo this process. Spirits such as whiskey, brandy and vodka are made using the method.

The petrochemical industry uses fractional distillation to refine oil. Distillation towers are large structures made to separate the fractions of this fossil fuel.

Distillation is a property-based separation method.

the chemistry
b) Physics
c) Biological
d) General of the matter

The boiling point is a specific physical property of matter, as it is inherent in a given substance. It is the temperature at which a material changes from a liquid to a gaseous state, that is, it undergoes evaporation.

These are examples of mixtures separated by distillation, EXCEPT

Water and oil are immiscible substances. In this case, the decantation method is used to separate the components of the mixture. This method is based on density difference.

Brine (water + salt) and seawater, which also has dissolved salts, are separated by simple distillation. For water and acetone, fractional distillation is used.

(UFRGS) A biphasic heterogeneous system is formed by three different liquids A, B and C. It is known that:

Based on this information, the most suitable methods for separating the three liquids are:

The heterogeneous system of the question has two phases:

Phase 1: liquids A and B, which are miscible with each other
Phase 2: liquid C, which is immiscible with the other components

Sometimes it can happen to minimum formula be the same as the molecular formula of the compound; ... 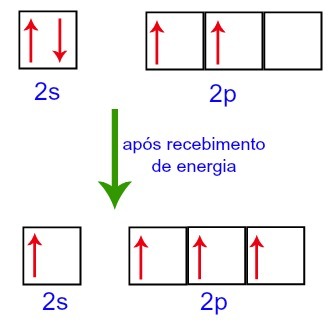 defines itself as hybridization the union of incomplete atomic orbitals. An orbital is classified...

question 1Every 6,115 L of gaseous hydrogen sulfide, H2S, bubbled in the water, it turns out that...