10 exercises commented on denotation and connotation

Test your knowledge of connotation and denotation with questions commented on by our expert teachers.

Which of the options below has the figurative meaning:

a) The handouts are exorbitantly priced.
b) We can't get the service at the bank.
c) The employee was very confused by the data.
d) He was very sweet and considerate to me.
e) On the way home, we found a kitten.

Correct alternative: d) He was very sweet and considerate to me.

The figurative sense, also called the connotative sense, encompasses the subjective sense of the word. So the term “sweet” is not being used in its literal sense, that is, something that is sugary. In this case, it is being used to indicate someone who is quiet, who acts gently.

I. I will finally satisfy my hunger with this snack.
II. The children's battery doesn't seem to run out.
III. The guy who robbed the store was masked.

According to the above sentences, it is correct to state:

a) the expression “killing hunger” is in the denoting sense and indicates that the person will end hunger by eating the snack.

Correct alternative: c) the term “masked” is being used in a denotative sense, as the subject was wearing a mask so as not to be recognized.

Sentence III is the only one in which the denotative and real sense of the words is being used. That person who robbed the bank was wearing a mask so as not to be recognized.

Sentences I and II use expressions with a figurative, connotative sense: “killing hunger” and “battery”. Thus, they are used subjectively and not in their objective, real and literal sense.

“Killing” is taking someone's life and it is not possible to take life from hunger, because it has no existence. Likewise, “battery” is something that objects have and not people. 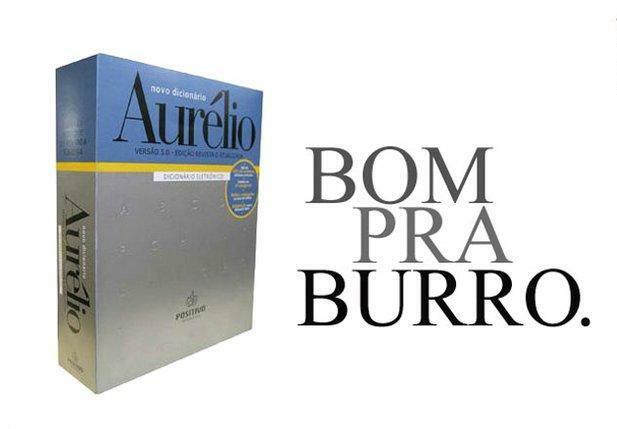 The image above is an advertisement for the Aurélio dictionary. About this, we can say that:

Correct alternative: b) the advertisement uses a colloquial expression with a connotative sense to warn about the importance of the dictionary.

The expression “good for ass” is a connotative expression that means, in the real sense, “too good”.

The ad used this colloquial expression to emphasize that the Aurélio dictionary is too good for ignorant people, who lack intelligence, those who are pejoratively called donkeys.

All of the alternatives below have clauses that have the connotative sense, EXCEPT:

a) "marriage is not a bed of roses"
b) "my thoughts soared high"
c) “when stepped on, my heart bled”
d) "fed on courage"
e) "he cried intensely until he slept"

Correct alternative: e) "he cried intensely until he slept"

The prayer “he cried intensely until he slept” is an example of the use of the denotative, literal and real sense. No term used has any subjective, figurative meaning. That is, the person literally cried a lot until bedtime.

In the other options, we have:

Know how to live

"I do not know…
if life is short
or too long for us.
But I know that nothing we live
makes sense,
if we don't touch people's hearts.”

The excerpt above is a stanza from the poem “Saber Viver” by Cora Coralina. From the sentences below the one that represents the connotative sense is:

The verb “to play” is being used in its connotative sense, as it is not possible to play with your hands on the heart organ. Here, touching people's hearts means sensitizing them.

Indicate whether the clauses below have the denotative (D) or connotative (C) meanings.

The correct alternative is:

1. (Connotative sense) My uncle was very rich and swam in gold. - “swim in gold” is an expression used when a person has a lot of money.

3. (Connotative sense) She had a heart of stone. - “heart of stone” is an expression used when someone appears to have no feelings.

4. (Denotative sense) Fell and bruise his head on the stone. - prayer in the literal sense.

5. (Connotative sense) Swallowed a lot of frogs at work. - “swallow frog” is an expression used when someone suffers accusations, judgments and does not fight back.

In the strip above, the connotative sense is used for:

a) express the character's feeling in the second frame.
b) demonstrate the solution given by the character in the last frame.
c) highlight the interest of people in situations of extreme poverty.
d) minimize the characters' fright when they meet a beggar.
e) indicate the importance of improving the lives of poor people.

Correct alternative: a) express the character's feeling in the second frame.

In the second frame, Mafalda states that she is “heart-tight”. This expression, used in the connotative sense, indicates the feeling of anguish that arose from seeing a person in a situation of extreme poverty.

I'm a very light sleeper, and one night I noticed someone sneaking around in the backyard.

I got up in silence and followed the slight noises coming from outside, until I saw a silhouette passing through the bathroom window.

(Excerpt from the chronicle learn to call the police, by Luís Fernando Veríssimo)

I had taken her to the elevator, both anxious for her to leave and saddened by her departure. Our conversation had been bitter. When I opened the elevator door for her, I made a tender gesture in farewell, but, as I had predicted, she resisted.

(Excerpt from the chronicle brave girl, by Rubem Braga)

About the texts, it is correct to say:

Correct alternative: a) In text I, the connotative language is found in the expressions “light sleep” and “light noises”.

In text I, the word “light” is being used in a connotative sense. In the literal or denotative sense, this term means “that doesn't weigh”.

Thus, the expression “light sleep” indicates that a person wakes up with any noise. Already “light noise” means that the noise is low.

In text II, the connotative sense is indicated by the use of the term “bitter”. A bitter conversation means that she was sad and caused pain, resentment.

The washerwomen of Mossoró each have a stone in the river: each stone is a family heirloom, passing from mother to daughter, from daughter to granddaughter, as the waters pass through time […]. The washerwoman and the stone form a special being, which divides and gathers at the work's whim. If the woman sings a song, one notices that a new stone is quietly accompanying her… […]

Based on the reading of the texts, it is possible to establish a relationship between form and content of the word "stone", through which it is observed

Correct alternative: a) the use, in both texts, of the connotative sense of the word “stone”.

In both texts, the word “stone” acquires another meaning and, therefore, is figuratively, connotative.

In text I, the “stone” means an obstacle, that is, something that is hindering the passage. Likewise, in text II, it represents a difficulty, an obstacle in the life of the laundresses.

when i sit by the window
By the glasses that the snow fogs up
I see her sweet image
When it passes... raisin... raisin…

His veil threw me the sorrow: -
One less being in this world
And another angel in heaven.

When I sit by the window,
By the glasses that the snow fogs up
I think I see her image
That no longer passes... do not pass...

I - Verses 6 and 7 refer to death in a denoting way.
II - In verses 6 and 7 there is an ironic reference to the veil of sorrow.
III - The parallel between verses 1/2 and 8/9 points to a cyclical action.

From the above statements:

I. False - verses 6 and 7 are not in the literal, denoting sense of the expression. They refer to death in a connotative, figurative way: “one less being in the world / And one more angel in heaven”.

II. False - the lyrical self is not being ironic, as it is really hurt by the person's death.

III. Correct - in literature, parallelism offers musicality in texts and, in this case, it is called “parallelism anaphoric”, as there is, as in the anaphora figure of speech, the repetition of verses that provide the idea of ​​something cyclic.

When I sit by the window,
By the glasses that the snow fogs up

Test your general knowledge and make sure you are up to date with current affairs!question 1"The ...