What are punctuation marks for?

The dot is a sign that indicates the end of the period. It's a long-lasting break. After the period (also called the period) we use a capital letter. The period is also used in abbreviations.

The exclamation point can indicate amazement, surprise, wonder. It is often used in imperative-mode sentences or accompanying interjections (words that translate sensations and emotions, such as "Ah!", "Wow!", "Wow!", "Oops!").

see the Meaning of Interjection

The question mark is used in questions and inquiries. Indicates doubt.

On Mondays, he dedicates himself fully to his work; on Tuesdays he goes to the market, cleans the house and works; on Wednesdays, Thursdays and Fridays, the routine changes little; however, when Saturday comes, he can't wait to go out for a walk.

The ellipses (the famous three dots) bring the sentence to a halt. They may indicate hesitation, doubt, interruption of speech, prolongation of an idea, etc. Associated with parentheses, they indicate suppression of the transcribed excerpt (in the case of citations).

The dash has some functions. One of them is to indicate dialogue. When replacing the comma or parentheses, it highlights the element. You can also substitute the colon. There are cases where two dashes must be used.

Parentheses are used to isolate phrases, words and dates. Can be used in place of commas or dashes. They are widely used to isolate ancillary information (notes, addenda, meanings etc.).

Quotation marks have several functions. They can be used to isolate words: foreign words (words from another language) not incorporated, neologisms (new words), popular expressions or terms unrelated to the cultured norm. They also indicate speech or quotation from someone else's text.

The comma is a slight pause in the reading that indicates that the separate terms, despite belonging to the same period, do not form syntactic unity. There are many situations where the comma should be used. In others, its use is prohibited. There are cases where its use is optional.

Some situations in which comma should be used

1. To separate elements from an enumeration

2. To separate the vocative (vocative is a calling)

3. To separate the affix (apost is a term of the sentence that characterizes or determines a name or an expression)

3. Separate the anticipated or intercalated adverbial adjunct (adverbial adverbial is a clause term that joins the verb to specify or intensify its meaning)

Note.: if the coordinated clauses are introduced by the conjunctions “and”, “neither” or “or”, there is no need to use the comma. Ex.: I like to eat fruit in the morning and I love to eat salad for lunch. Exception: if the subjects of the sentences are different, the use of a comma is recommended. Ex.: I like to eat fruit, and Manuela likes to eat chocolate.

Maria went to the cinema, João stayed at home.

see the meaning of conjunction.

Yes, he was the one who came to us.

She was anxiously waiting for the order to arrive.

The Brazilians, who are football fans, watched the match very carefully.

10. Indicate omission of a term (zeugma)

It must be said, however, that TV did not die after the advent of the internet.

Some cases where the comma should not be used

1. the comma she can not separate subject from predicate

2. the comma she can not separate the verb from its complements

Some cases where the use of comma is optional (optional)

1. the comma he can separate syndetic coordinated clauses (in the case of adversative and conclusive clauses, their use is mandatory)

2. the comma he can separate conjunction at beginning of period 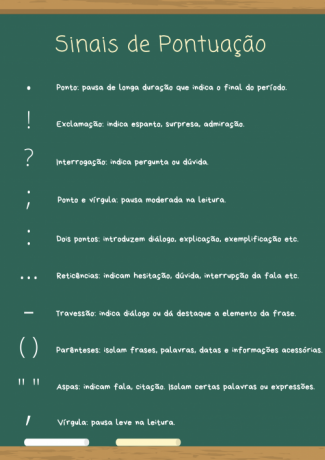 Meaning of the expression Above (What it means, Concept and Definition)

Above is an adverbial phrase and means that something is a superior position, on the top.It can b...

Meaning of Polyphony (What it is, Concept and Definition)

Polyphony is the multiplicity of different sounds played in harmony rhythm.Polyphonic sounds are ...

Meaning of Spontaneity (What it is, Concept and Definition)

Spontaneity is the condition of something or someone that is spontaneous, that is, that it acts i...