What is absolute zero?

O absolute zero is the lower limit of temperature in nature, that corresponds to the lowest possible temperature to be reached and equals – 273.15 °C or 0 K. It should be remembered that there is no upper temperature limit, and the existence of extremely high temperatures is entirely possible. The temperature of the core of the sun, for example, is approximately 15 million degrees Celsius.

The definition of absolute zero was made by William Thompson, known as Lord Kelvin. The scientist realized that when a gas undergoes a isovolumetric cooling (with constant volume) from 0 °C to – 1 °C, to pressure was decreased by about 1/273 of the initial value. Therefore, Lord Kelvin understood that by taking the gas temperature up to about – 273 °C, the pressure should decrease as much as possible and, consequently, the movement of the particles that make up the gas would cease. For this temperature, the scientist determined the value 0 K, the temperature at which molecular agitation is stopped.

For a long time, the temperature corresponding to absolute zero was considered unattainable. However, scientists at Ludwig Maximilian University in Germany have managed to prove that this temperature can be reached and even exceeded. This can be done using a supercold gas made of potassium atoms. In addition to developing the study of quantum materials, this gas behaves like dark energy and can help science understand the origin and evolution of the universe.

After experiencing a period of relative prosperity, the captaincy of São Vicente began to face so... 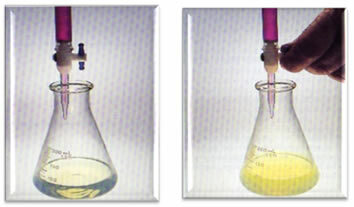 Mixing of solutions with occurrence of chemical reactions

In order for a chemical reaction to occur in a mixture of solutions, their solutes must not be t...

Why are used batteries toxic waste?

Many people are not aware that they may be storing a powerful toxic waste in their own homes: use...