A historical look at the conflict between the Arab population and the Jewish population allows recognize the main events and the chronology of agreements, tensions and the current situation in the region of Palestine. In this way, we highlight the following events, taking as reference the Zionism of the 19th century.

second half of the 19th century: beginning of the Zionist movement (Jewish feeling of returning to the holy homeland). Jewish ethnic groups from different parts of the world began to migrate to the region of Palestine, still under the rule of the Turkish-Ottoman Empire.

End of World War I: fall of the Ottoman-Turkish Empire and border delimitation of countries based on British and French interests.

1956: Suez Conflict – Egypt nationalized the Suez Canal, an important passage between the Mediterranean Sea and the Red Sea. France, England and Israel invaded Egypt. Due to agreements established by the USSR and the United States, the invading countries retreated and Egypt was strengthened, increasing the ideals of Pan-Arabism.

1964: Creation of the PLO (Organization for the Liberation of Palestine), led by Yasser Arafat.

1979: Camp David Accords – Mediated by US President Jimmy Carter, Egypt and Israel sealed an agreement, ending economic embargoes and mutual sanctions. Israel returned the Sinai Peninsula to Egypt which, in turn, recognized the representativeness of the State of Israel. Egypt was the first Arab country to recognize the State of Israel, being considered a traitor by some Arab leaders.

1980s: Amidst the poverty situation of the Palestinian majority, the few prospects for a peace agreement in the region and the recruitment of young people through religious values, armed militias, known in the West as terrorist groups, such as Hamas and the Hezbollah.

1993: Oslo Accords - US President Bill Clinton established mediation between Arafat (Palestine) and Israeli Prime Minister Yitzhak Rabin. The creation of the ANP (Palestinian National Authority) was established as the official political organization of the Palestinian nation and the gradual disengagement of Gaza and the West Bank.

1995: Rabin was murdered by a Jewish extremist. The far right took power in Israel and did not commit to evacuating the areas where the Palestinian population is concentrated.

2005: Beginning of withdrawal from Jewish settlements in Gaza. Mahmoud Abbas won the Palestinian presidential election. A member of the moderate Fatah group, he favored negotiations with Israel.

2006: Hamas won the Palestinian parliamentary elections. UN, EU, United States and Israel did not recognize such elections. Disputes between Hamas and Fatah, which sought the formation of a Palestinian State by different paths, increased: Hamas seeks a State Religious, using force and denying the Jewish presence, while Fatah seeks a secular state favorable to dialogue with Israel.

2007: Egypt and Israel's trade blockade of Gaza in order to reduce Hamas' access to various supplies, such as weapons, but which ended up reducing the quality of life of all Palestinians in the region.

2010: Expectation of the Palestinian elections, which were again postponed and, this time, indefinitely, due to Fatah divisions and Hamas boycotts. Israel announced the construction of 1600 houses in East Jerusalem. The UN, Russia, the United States and the EU have set a two-year deadline for Israel to vacate the West Bank. Shortly thereafter, Israel attacked a convoy of Turkish ships carrying supplies of food and medicine to Gaza, killing nine unarmed civilians.

2011: Hamas and Fatah signaled for a dialogue in order to eliminate their political and strategic differences. US President Barack Obama stated that the ideal scenario would be a return to pre-Six-Day War borders.

2012: Palestine acquired the status of an Observer Non-Member State of the UN, without the right to vote in the General Assembly, but able to participate in the discussions of the institution.

2013 (first semester): Legislative elections in Israel kept the concentration of power in the hands of the conservative Likud party. Members of Hamas and Fatah forged closer ties to create a coalition government.

An African country located in the Indian Ocean, Madagascar is the fourth largest island in the wo...

Epicurus' doctrine arose at a time of dissatisfaction with the condition of the Greek City-States... 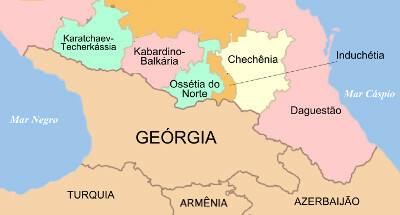 Russia is one of the most obvious examples of the gap between the construction of borders policie...