Note: Non-volatile solute is any substance that has a high boiling point and low melting point and capable of dissolving in a certain solvent.

Generally speaking, when a non-volatile solute is added to a solvent, it makes it difficult for the solvent to evaporate. Thus, a higher temperature is needed to be able to evaporate the solvent. At ebullioscopy, this increase in the boiling point of the solvent is studied.

To perform the calculations of the ebullioscopy, we have the following formulas:

It is a formula that, to be used, depends on the knowledge of the ebullioscopy constant, which is related to the solvent present in the solution, and the molality (W). Each of these variables has a particular formula.

The Van't Hoff correction factor (i) may also appear in this formula, however, only if the non-volatile solute present is ionic.

Note: To determine the Van't Hoff correction factor, we need the degree of ionization or dissociation of the solute and the number of particles (q) ionized or dissociated by the solute when present in water.

In this formula, we have the general gas constant (0.082), temperature (always worked in kelvin) and the latent heat of vaporization.

Note: Based on the knowledge of the molality formula, if we replace the W, present in Δte's formula, by its respective formula, we will have the following result:

Example of application of formulas in the calculation of ebullioscopy

1st Example - (Uece) Following in the footsteps of French chemist François-Marie Raoult (1830-1901), researching the ebuliometric effect of solutions, a chemistry student dissolved 90 g of glucose (C6H12O6) in 400 g of water and heated the whole. Knowing that Ke in water = 0.52 ºC/mol, after some time, the initial boiling temperature found by him was: (Data: Molar mass of glucose = 180 g/mol)

Data provided by the exercise:

As the exercise provided the masses and the ebullioscopy constant, just use the data in the expression below:

2nd Example - (Uece) Calcium chloride (CaCl2) has wide industrial application in refrigeration systems, in cement production, in milk coagulation for cheese production, and is excellently used as a moisture controller. A calcium chloride solution used for industrial purposes has a molality 2 and a boiling point of 103.016 °C under a pressure of 1 atm. Knowing that the ebullioscopy constant of water is 0.52 °C, its apparent degree of ionic dissociation is:

Data provided by the exercise:

As the exercise provided data on ebullioscopy, such as Ke and molality, it is evident that we should use the following formula for ebullioscopy:

However, as the exercise asks for the degree of dissociation, we must work the above formula with the Van't Hoff correction factor (i):

Also, to calculate the degree, you will need to replace i with its expression, which is 1 + α.(q-1):

Finally, just multiply the value found by 100 to determine the percentage: 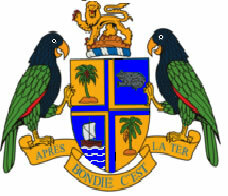 Dominica is located on an island of volcanic origin in the Lesser Antilles archipelago, in the Ca...

Blenorrhea: cause, symptoms, treatment and prevention.

Blenorrhea, also called gonorrhea or gonorrhea, consists of a bacterial infectioncaused by Neisse...