THE nobelium, symbol No and atomic number 102, is a chemical element belonging to the actinide group of the Periodic Table. Despite having 12 isotopes, one with a half-life of 58 minutes, nobelium is not found in nature, being synthesized in the laboratory. Although a metallic sample of No has never been produced, it is known that this element always has a charge of +2 in solution.

The Nobelium, which honors the Swede Alfred Nobel, is an element with a history of discovery characterized by contradictions and conflicts. Until it was made official by Iupac, this element was the protagonist of clashes between American, Russian, British and Swedish scientists, in a typical episode of the Cold War in the history of science.

Nobelium, symbol No and atomic number 102, is a element belonging to actinides. Given its atomic structure, nobelium does not have sufficiently stable isotopes to be detected in natural sources, after all, of its 12 known isotopes, the one with the longest half-life (time required for the amount of the sample to fall by half) is The 259No (with 58 minutes), followed by 255No (with 3.1 minutes).

Therefore, to study nobelium, it is necessary to produce it in the laboratory, using particle accelerators for nuclear fusion reactions to occur, which characterizes it as a synthetic chemical element. The 255 isotope is even the most used in chemical studies, presenting, among all the isotopes, the highest production rate.

Despite being considered a metal, a metallic sample of the element nobelium has never been produced. However, its chemistry in solution is more discussed: although the other actinides have a charge of +3 in aqueous solution, nobelium presents the +2 oxidation state as the most stable.

This property was predicted in 1949 by Glenn Seaborg, since, with the eletronic distribution ending in 5f14 7s2, it would be more interesting for nobelium to lose only two electrons and keep the 5f subshell14 filled.

In 1968, about 600 experiments were carried out in which 50,000 atoms of 255They were not the protagonists, aiming to make their precipitation in some compounds. The results showed that No had chemical behavior closer to alkaline earth metals (strontium, barium and radio) than the trivalent actinides, confirming that the 2+ ion of No would be the most stable species for this element.

Nobelium is not found in nature, requiring its production in the laboratory. the isotope 255No, the most used in chemical studies, It can be obtained through the reaction of Fusion nuclear via bombing the 249Cf for ions of 12Ç.

The average yield is about 1200 atoms after 10 minutes of experiment. The produced nobelium can be separated from other actinides, which may, by chance, be produced in the process by means of column chromatography.

Nobelium, despite not having many practical features for us in everyday life, was the protagonist of a great clash between scientists about its discovery. It was the beginning of a typical episode of Cold War in the history of science and gives Periodic table, which later evolved into the War of the Transfers.

Until then, the synthesis of superheavy elements was dominated by scientist Glenn Seaborg and his team of nuclear physicists and chemists in California. However, in 1957, a group of scientists claimed to have produced two isotopes of element 102 by bombarding curium atoms (244cm) with ions of 13Ç. This group consisted of Swedish, British and American scientists from the Nobel Institute for Physics in Stockholm.

From there, Stockholm physicists announced the new transuranic element with symbol No, grantedhim the name Nobelium, in honor of the legacy of Alfred Nobel. The discovery was widely reported by the press at the time, including the famous newspapers. Svenska Dagbladet, from Sweden, and The Guardian, from England.

However, there was something beyond the scientific interest behind the discovery, as can be seen in the words of the English scientist John Milsted, who worked in the Stockholm group: “this is the first transuranic element to be discovered on European soil and the first to be created through an effort International". Clearly, in the Cold War climate, the scientist made a reference to the Soviet scientists from Dubna, a Russian city.

However, later on the discovery of the Swedish-British-American team showed itself insufficient, thus allowing distrust of rival laboratories, both Soviet and Americans, causing them to claim responsibility for the true discovery of the element 102.

The Berkeley Americans, led by Glenn Seaborg and Albert Ghiorso, initially assumed that Stockholm papers would be correct, after all, they were published in the respected scientific journal The Physical Review. However, at no time was it possible to reproduce the experiments carried out in Stockholm.

Ironically, the American group even proposed the name nobelievium (loosely translated to "I don't believe") as something more suited to element 102. In 1958, Ghiorso, Seaborg, together with scientists Torbjorn Sikkeland and John Walton, announced the production of the isotope 254Not through the bomber of the 246cm per ions of 12C, and thus requesting acknowledgment for the discovery of element 102.

The Stockholm group admitted that the results obtained at Berkeley raised some doubts about their own results, but that a new analysis and interpretation in 1959 showed that the doubt was only apparent.

Furthermore, Stockholm group results could not be reproduced by Soviet scientist Georgii Flerov and his collaborators at the Moscow Kurchatov Institute in Dubna. Russian scientists did not believe those in Stockholm, apart from claiming that the American experiments were only an indication of element 102.

The Russians had already synthesized element 102, in 1957 and 1958, by bombing 241Pu with ions of 16O, without necessarily achieving recognition for the discovery. However, later experiments, which lasted until 1966, provided more compelling evidence for the existence of isotopes of this element. From there, Flerov pointed out inconsistencies in Berkeley's works and claimed that the Nobelium was discovered in Dubna, in experiments that took place between 1963 and 1966.

Despite many clashes between the Russian and American sides, the Dubna group did not suggest a different name for Nobelium, although the Americans wanted it that way, as it would be interesting to choose a name that would better reflect their discovery.

Even so, the International Union of Pure and Applied Chemistry (IUPAC), in 1961, made official the entry of the element 102 with the name of nobelium, but without citing any isotope or atomic mass, a sign of the uncertainties of the era. Anyway, this allowed the popularization of nobelium in books and periodic tables, and so the Americans gave up on giving the element a new name.

In the late 1990s, IUPAC resolved the issue of naming superheavy elements, considering the Dubna group to be responsible for producing element 102. However, the name adopted was nobelium, with symbol No.

Nobelium, atomic number 102, has 12 isotopes. Among them, the most stable is the isotope 259No, with a half-life of 58 minutes. Imagining a process of synthesis of this isotope, how many minutes would it take for its mass to decay to one-eighth of the initial mass?

Although not the most stable, the isotope 255 of Nobelium (Z = 102) is the most commonly used and produced in laboratories. How many neutrons does the isotope 255Don't own?

The number of neutrons of No can be calculated as:

Question Mark is a graphic sign that indicates doubt and is therefore used in direct questions. I... LeonTrotsky he was a Russian revolutionary who played a leading role in the Russian Revolution of... 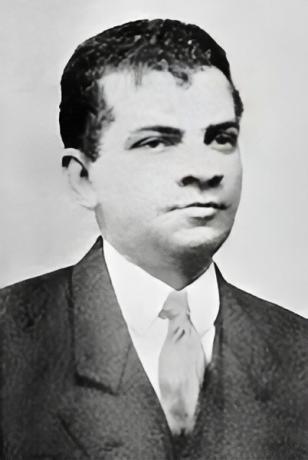 Sad end of Policarpo Lent is the best known novel by Lima Barreto. This work tells the story of M...