A metaphor is a figure of speech in which words or expressions are used in a different sense than usual. In these situations, words are used by comparing meanings and interpretations that may exist between them.

Thus, the comparison in the metaphor is not explicitly stated, it is implied through the comparative sense used.

See the example: Antonio arrived home with a lion's hunger.

In this sentence the expression "lion hunger" was used as a metaphor to demonstrate that Antônio had a lot of hunger when he got home, using a comparison between a lion's appetite and a lion's hunger Antonio.

Metaphors can be used in all forms of communication: in speech, in literature, in music, in cinema, among many other forms of expression. Get to know some famous metaphors:

1. The rose of Hiroshima

Vinícius de Moraes composed the poem Hiroshima rose in the year 1946. In one excerpt the poet wrote:

Vinícius used the application of the metaphor to criticize the bombers carried out by the United States against the city of Hiroshima in August 1945, during World War II.

When he used the figure of speech to call the bomb a rose, the poet made a reference to the moment of the bomb's explosion, which resembles the image of a rose, as seen in the photo below.

Thus, it is a metaphor that makes a severe criticism of the bombing, as the roses, delicate and beautiful, in no way resemble the destructive power of an atomic bomb.

Metaphors "radioactive rose" and "hereditary rose"they are references to the radioactive power of the atomic bomb and the serious consequences of that attack, which for a long time affected the population of this city.

The force of radioactivity is such that several generations born in Hiroshima have suffered from health problems and deformities caused by the radiation from the bomb. 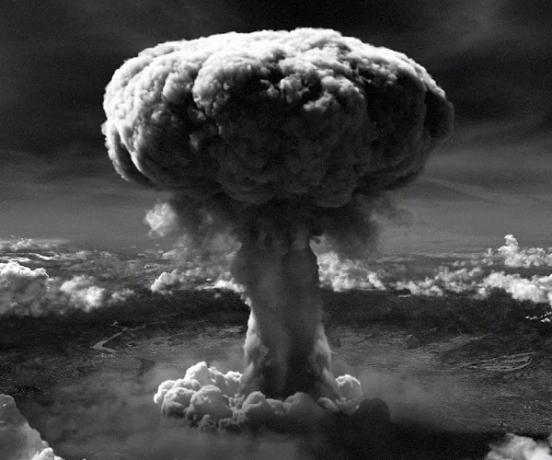 Atomic bomb dropped on the city of Hiroshima in August 1945.

In this excerpt, which is part of the book Sete times Rubem, the author Rubem Alves used the application of the word cage to criticize schools that do not encourage freedom and diversity of thought among their students.

Thus, using the comparison of forms of imprisonment, Rubem declares that schools that do not encourage students' own thoughts imprison them, just as cages are used to take away the freedom of birds.

In the chronicle "Cages and wings" the author opines that schools that do not encourage students are places that make them the birds (students) unlearn the art of flying, becoming trapped people, under the control of ideas already existing.

Asas schools, on the other hand, are schools that encourage thought and give wings to students, enabling free flights, based on ideas and concepts produced individually by each one.

3. Iracema and the lips of honey

Metaphor is an ancient linguistic resource, used for a long time in literature. We find an example in the work Iracema, by José de Alencar, published for the first time in 1865. It is interesting to note that the author used to use metaphors in his works, not only when writing the novel Iracema.

In this book, when describing the character Iracema, the author describes her as follows:Iracema, thevirgin of the lips of honey. José de Alencar used metaphorical language to describe the character, seen by a beautiful and passionate look, saying that she had lips that were as sweet as honey. It can be said that the metaphor was used to express the idealized vision of the woman, one of the main characteristics of the romanticism, literary genre to which the work Iracema belongs.

Read more about the Romanticism and meet some features of this artistic movement.

In the song missing a piece, by Djavan, there is a metaphorical passage:

In this song, the musician used a metaphor when talking about love, comparing the feeling to a bond. In this way, Djavan expressed the idea that the feeling of love makes people who love each other feel united and intertwined, as well as a bond.

Using the metaphorical figure, Djavan defined the union and the positive feelings that are experienced by people who live in a love relationship.

5. The eraser of erasing ideologies Mafalda is a character known for being restless and very inquisitive. In this famous cartoon by Argentinean cartoonist Quino, creator of the character, a metaphor is used to refer to the truncheon used by the policeman.

To better understand the language used in the comic, it is necessary to analyze the historical context of its publication. Mafalda was originally published between 1964 and 1973, when Argentina was under a harsh military regime.

When the character refers to the truncheon as the "eraser for erasing ideologies", Quino's criticism of the police repression that occurred at the time against people who were fighting for the end of the dictatorship, especially during popular demonstrations.

Definition of Polysyndeton (What it is, Concept and Definition)

Polysyndeton is a figure of speech in the Portuguese language, which consists of the repetitive a...

Meaning of the Periphrase (What it is, Concept and Definition)

Periphrase is a figure of speech in Portuguese, used to represent the using an expression or phra...

Meaning of Zeugma (What it is, Concept and Definition)

Zeugma is a figure of speech in the Portuguese language, which consists of the omitting a word al...