O high altitude tropical climate it occurs predominantly in the higher portions of the Southeast region of Brazil, covering areas of São Paulo, Minas Gerais, Rio de Janeiro and Espírito Santo. It is characterized by mild average temperatures, around 18 °C to 22 °C, and rainfall throughout the year, with greater volumes in summer. This climate is strongly influenced by the tropical masses and the Atlantic polar mass, which conditions cold weather in winter, frontal rains and the occurrence of frost.

Read too: Influence of altitude on climate

The high altitude tropical climate is characteristic of situated areas at altitude equal to or greater than 800 meters, occurring in the latitudinal ranges corresponding to the intertropical zone of the planet. The main aspect that sets it apart from tropical weather typical is the temperature, which, due to the geographic elevation, is milder than in the lowered areas.

Temperatures in the high-altitude tropical climate are considerably milder than in the typical tropical climate, as we have seen. At averages are around 22 °Ç, and the thermal range annual, that is, the temperature variation during the year, is between 7 °C and 9 °C.

O summer it is the hottest season of the year, but the highs are between 25 °C and 28 °C, commonly below 30 °C. Under the action of the cold masses, the Winter it is the season that registers the lowest temperatures, which can vary between 15 °C and 18 °C.

The moisture input of the high altitude tropical climate is influenced by the performance of the wetter air masses, such as mTa and mPa, and also by the intense evapotranspiration which takes place in the hottest months of the year.

At rains occur during all months of the year, but they are more abundant in the period from October to March, comprising much of the spring and summer months. The rainfall volume decreases considerably in winter, especially between June and August. Annually, an average of 1,500 mm of rain is recorded.

In winter, some locations register the frost occurrence, phenomenon characterized by the formation of a thin layer of ice on the foliage.

Many high-altitude tropical climate locations are covered by forest formations such as the tropical florests, like the Atlantic forest in the Southeast region and part of southern Brazil. In this region, another typical formation that can be found mainly in the central portion of the state of Paraná is the Araucaria Forest.

Open fields, with medium and small vegetation, such as shrub species, small trees and grasses, they are also formations that can be observed in areas of high altitude and climate with alternately wet season and dry.

Read too: Brazil's morphoclimatic domains — areas defined based on their landscape composition

Air masses that act in the high tropical climate

As with other types of weather, the high altitude tropical climate is influenced by the action of different air masses. These large atmospheric bodies carry with them the characteristics of temperature and humidity of the place where they are form (region of origin) and, as they move, transfer these properties to the areas that cross.

Taking this into account, we have the performance of the following air masses in high altitude tropical climate:

The high altitude tropical climate is exclusive to some portions of the regions Southeast and South of Brazil, more precisely those located above 1,000 meters of altitude. This climate covers the following areas:

→ Video lesson on climates in Brazil

Pay close attention to the climogram below. The blue bars indicate the volume of rainfall recorded for each month, while the red line represents the variation in temperature. 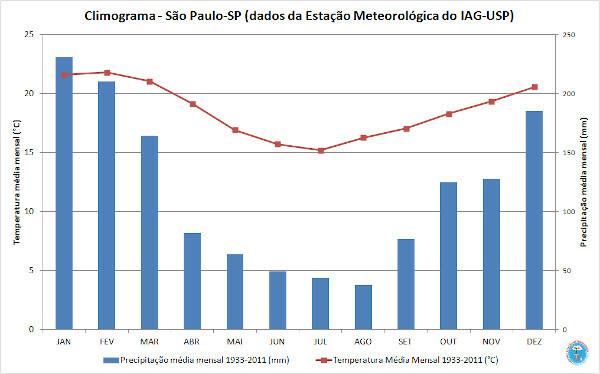 Identify which climate type is represented above:

Resolution: Alternative D. The weather chart above represents the climate of the Sao Paulo City (SP). The rainfall graph indicates the concentration of rainfall in the months corresponding to the summer, especially in December and January. Winter is the driest season, with the lowest rainfall between June and August. Temperatures in summer are high, but are around 22 °C, while in winter the lowest recorded is 15 °C. These features are representative of the high tropical climate.

The high altitude tropical climate differs from the typical tropical climate by its milder temperatures. It occurs in the plateaus and mountains of the Southeast region of Brazil, and can be observed in other places in the national territory. All characteristics listed below are indicative of this climate, except:

a) relatively hot summers and cold winters, with the occurrence of frost.

b) abundant and well-distributed rains throughout the year.

c) advance of cold fronts that give rise to frontal rains.

Resolution: Alternative B. In the high-altitude tropical climate, rains occur throughout the year, but the largest volumes are concentrated in the summer months. This means they are not well distributed. This alternative actually reflects a characteristic of the subtropical climate.

Overdraft is a contract between the bank and the account holder, where a certain amount of money ...

The word "jeito" and its polysemic meanings

Given the linguistic utterances, let us analyze:Mariana has a way that conquers me.Today I woke ...

population growth in the world is characterized as the increase in the number of inhabitants on t...