Food chain and web: what they are, differences and examples

Food chain is the path of transfer of matter and energy when one being serves as food for another. The set of food chains is called the food web.

Therefore, the main difference between food chains and food webs is the complexity of food relationships.

While in the food chain one can perceive the unidirectional flow, in the food web the different chains intersect, forming a network.

See an example of a food web in the image below. Difference between food chain and web

At food chain the arrows go one way and indicate the flow of energy. In this representation, it is possible to perceive the position occupied by each living being, that is, its trophic level.

In a food web, on the other hand, there are several arrows that indicate the interactions between beings, that is, the connections between chains, just as occurs in an ecosystem, as a living being can feed on many others.

For example, a mouse can be part of two food chains, as it serves as food for snakes and foxes.

Furthermore, the position of a being in a food web, unlike what happens in a food chain, is not fixed. For example, a jaguar and a fox can feed on a rabbit. In these cases, the food chains would be:

Producers are autotrophic beings and are at the bottom of the food chain because they are capable of producing their own food.

In terrestrial food chains, plants are producing beings and in aquatic chains there are phytoplankton.

Consumers are heterotrophic beings, as they acquire nutrients and energy by feeding on other living beings.

When all living beings die, organic matter serves as food for decomposers, such as fungi and bacteria present in the soil.

You decomposers they recycle in the food chain and the released nutrients serve to fertilize the soil, used by producing beings, who start a new cycle.

Exercises on food chains and webs

Consider the three food chains below.

The first trophic level is formed by

Autotrophic beings are organisms capable of producing their own food. While grasses and vegetables can be found in terrestrial food chains, phytoplankton is the base of the aquatic food chain.

What happens to the flow of energy along a food chain?

Correct alternative: b) The longer the chain, the lower the energy obtained by living beings in the last level.

One of the ways to acquire energy is through photosynthesis, where autotrophic beings capture the sun's energy and store it as chemical energy. This energy flows in a food chain when one being feeds on another.

However, in the flow of energy in a food chain less energy is transferred from one trophic level to a higher one. This is because there is loss of energy in other processes, such as plants using energy for respiration.

(Unifor) The scheme below represents the trophic relationships found in a given ecosystem.

The following statements were made about the scheme:

I. Shrimps and frogs belong to the same trophic level.
II. Only birds are tertiary consumers.
III. The extermination of the snails will cause an increase in the population of carnivorous fish.

What is stated in

Correct alternative: b) II, only.

II. CORRECT Birds, like the heron, are tertiary consumers because they feed on secondary consumers, which are carnivorous animals.

III. WRONG. Because snails are the food base of carnivorous fish.

Check out more questions with commented resolution in 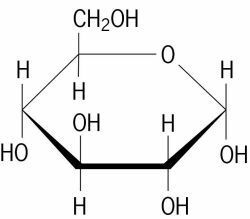 Glucose: what is it, metabolism and diabetes

Glucose is a simple carbohydrate of the monosaccharide type and represents the main source of ene... What are Nucleic Acids?

Nucleic acids are macromolecules made up of nucleotides that form two important components of cel... Amino acids: what they are, structure and types

Amino acids are organic molecules that have at least one amino group - NH2 and a carboxyl group -...