Exercises on food chain and web

Test your knowledge of food chains and webs with the 10 questions Next. Check out the comments after the feedback to get your questions answered. 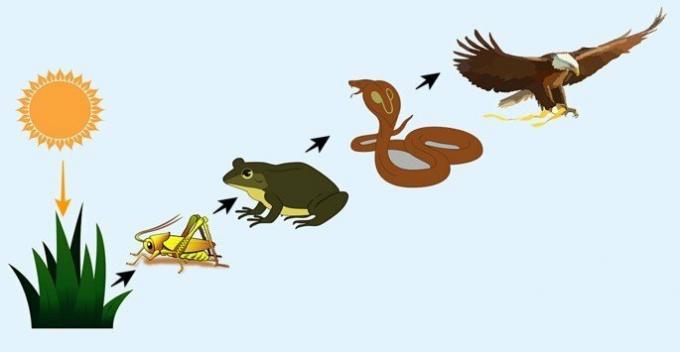 In the representation of the food chain above, the snake is considered a being.

Heterotrophic beings are those who are not capable of producing their own food and, therefore, need other beings to survive.

Snakes are carnivorous animals as they feed on other animals. As we see in the image, this animal is a 3rd order consumer, as it feeds on a frog, which feeds on a cricket.

Look at the food chain and answer: how many trophic levels are there in it?

In the food chain presented, there are five trophic levels, that is, it is divided into five positions, which are occupied by living beings according to the food source.

Producers, like grass, are beings capable of producing their own food and occupy the first trophic level. Consumers, on the other hand, feed on producers or other animals. 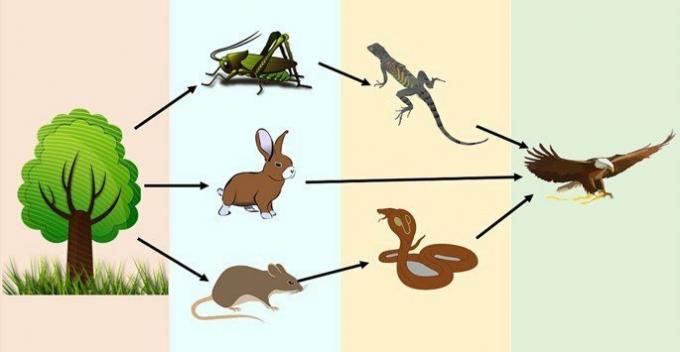 About the eagle in the food web above, it is correct to state that

a) She is an optional heterotrophic being.
b) It feeds only on primary consumers.
c) She is a predator and is restricted to hunting omnivorous animals.
d) It can occupy more than one trophic level in a food web.

Correct alternative: d) It can occupy more than one trophic level in a food web.

The eagle is a heterotrophic being considered one of the biggest predators. Its diet is varied and the animals most hunted by this bird of prey are fish, rodents, snakes and birds.

Thus, an eagle can occupy different trophic levels, that is, positions in a food chain.

In the example presented, when feeding on a snake or a lizard, the eagle is a tertiary consumer, as it fed on carnivorous animals and occupies the 4th trophic level.

When feeding on a herbivorous animal, in this case the rabbit, the eagle is in the 3rd trophic level of the food chain as a secondary consumer. 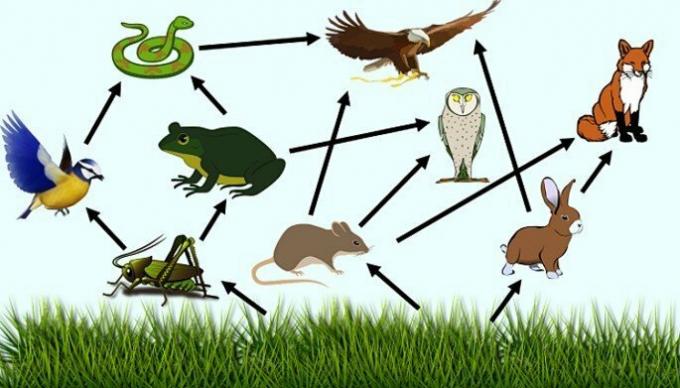 Regarding the food relationships presented in the food web, it is correct to state that:

a) Animals that feed on the grass are at the first trophic level.
b) Only the owl is a secondary consumer.
c) Snake and owl are tertiary consumers.
d) The eagle is part of the food web only as a quaternary consumer.

In the food web in the image we can see 7 food chains:

The grass is part of the first trophic level, as it is a producer and serves as food for the animals of the second trophic level, the primary consumers, which in the example are grasshoppers, rats and Bunny.

Secondary consumers are: frog, bird, owl, fox and eagle.
The snake and the owl appear as tertiary consumers.
Only the eagle participates in the food chains of the example as a quaternary consumer.

Regarding food chains and webs, it is correct to state that

a) In food relationships, the food chain presents the flow of matter and the food web the flow of energy.
b) While the chains present beings at the same trophic level, the webs represent the different existing levels.
c) A food chain corresponds to a unidirectional representation, while a food web demonstrates the interconnections between the chains.
d) In a food web each living thing must appear only in one food chain.

Correct alternative: c) A food chain corresponds to a unidirectional representation, while the food web demonstrates the interconnections between the chains.

In the aquatic ecosystem, phytoplankton is a set of microscopic algae that despite having a simple structure are able to capture sunlight and through photosynthesis carry out oxygenation of the Water. These microorganisms also serve as food for first-rate consumers, such as mullet and shrimp, as they are

Autotrophic beings are those who are capable of producing their own food. These beings are at the base of the aquatic food chain and serve as food for heterotrophic beings, which feed on other organisms to acquire nutrients and energy.

Why are decomposing beings responsible for the cycle of organic matter in a food chain?

Because decomposing beings, such as fungi, bacteria and protozoa, act on all trophic levels of the food chain and degrade the organic matter of dead beings to obtain energy.

The degradation of organic matter causes the nutrients made available in the environment to be used by producers, who restart the cycle, providing an ecological balance.

Energy in a food chain flows from a lower level to a higher level. However, there is a loss of energy in the transference between beings and, therefore, only a part of the energy is transferred to the next trophic level.

The longer the chain, the less energy will be available to the living being of the last trophic level.

(Enem/2010) The figure represents a food chain in a pond. Arrows indicate the direction of energy flow between the components of the trophic levels. 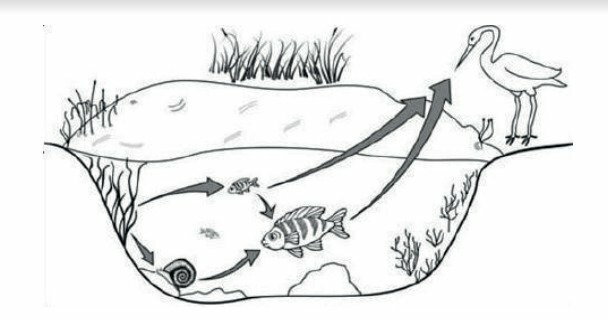 Knowing that mercury accumulates in living tissue, which component of this food chain will have the highest mercury content in the body if there is a spillage of this metal in that lake?

Correct alternative: a) Birds, as they are the top predators in this chain and accumulate mercury incorporated by the components of the other links.

Bioaccumulation corresponds to the accumulation of substances in the body of a living being. When an environment is contaminated, living beings are exposed to harmful components and the tendency is for the concentration to be greater in beings of higher trophic levels, that is, those at the top of the chain to feed.

(Enem/2020) In an ecosystem, the following food web is observed: 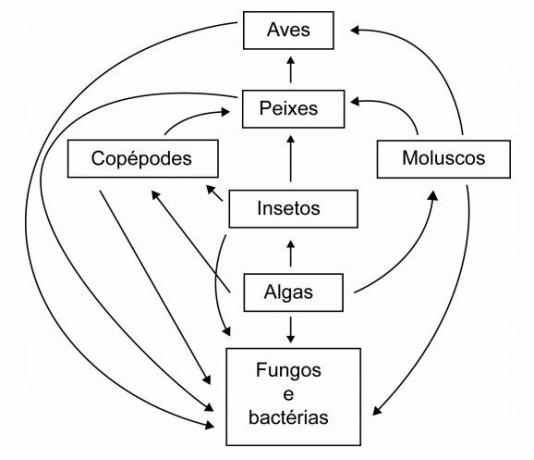 The lowest trophic level occupied by birds is the second order in the chain: algae → molluscs → birds. 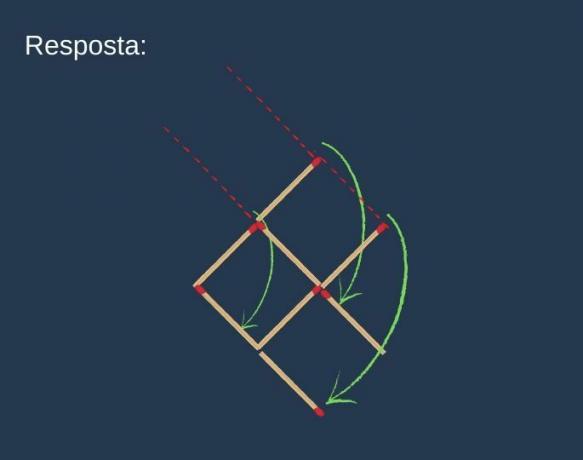 The causes and consequences of the First World War (1914-1918) are usually charged in Enem and in...

THE exponential function is every function of ℝ in ℝ*+, defined by f(x) = ax, where a is a real n...