Simple and compound interest are calculations performed in order to correct the amounts involved in the transactions financial, that is, the correction made when lending or investing a certain amount during a period of time.

The amount paid or redeemed will depend on the fee charged for the transaction and the period the money will be borrowed or invested. The higher the rate and time, the higher this value.

Difference between simple and compound interest

For this reason, compound interest is also called interest on interest, that is, the amount is adjusted on an amount that has already been adjusted.

Therefore, for longer periods of investment or loan, correction by compound interest will cause the final amount to be received or paid to be greater than the amount obtained with simple interest.

Most financial operations use the correction by the compound interest system. Simple interest is restricted to short-term operations.

This value, called the amount, is equal to the sum of the principal plus the interest, that is:

We can substitute the value of J in the formula above and find the following expression for the amount:

The formula we found is an affine function, so the value of the amount grows linearly as a function of time.

First, let's identify each quantity indicated in the problem.

Now that we have identified all the quantities, we can substitute in the interest formula:

However, please note that this fee is monthly as we use the 1 month period. To find the annual fee we need to multiply this value by 12, so we have:

The amount capitalized to compound interest is found by applying the following formula:

Unlike simple interest, in this type of capitalization, the formula for calculating the amount involves an exponential variation. Hence it is explained that the final value increases considerably for longer periods.

Calculate the amount produced by R$2,000 applied at the rate of 4% per quarter, after one year, in the compound interest system.

Identifying the information given, we have:

Replacing these values ​​in the compound interest formula, we have:

What is the amount of an investment of R$500.00, at a rate of 3% per month, in a period of 1 year and 6 months, in simple and compound interest systems?

The amount will be the starting capital plus interest.

So the amount will be:

Applying the values ​​in the formula, we have:

Answer: The investment amount under the compound interest regime is R$851.21.

A certain capital was applied for a period of 6 months. The rate was 5% per month. After this period, the amount was R$5000.00. Determine the capital.

Putting C in evidence in the simple interest formula:

Isolating C into the equation:

Isolating C in the compound interest formula and replacing the values:

Applying the formula and putting C in evidence:

Replacing the values ​​and doing the numerical calculations:

Let's use the formula for compound interest and divide the amount by the principal.

How long was this capital invested?

Therefore, the time is approximately 3.27 months.

In this step, we are faced with an exponential equation.

To solve it, we will use the logarithm, applying a logarithm of the same base, to both sides of the equation.

Using a property of the logarithms on the right side of the equation, we have:

To find the rate charged, we can apply the simple interest formula, considering that the interest was applied on the debit balance (TV value less down payment). So we have:

In Financial Mathematics, it is essential to keep in mind that the amounts involved in a transaction will be shifted in time.

Given this fact, making a financial analysis implies comparing present values ​​with future values. Thus, we must have a way to make the equivalence of capital at different times.

When we calculate the amount, in the compound interest formula, we are finding the future value for t time periods, at a rate i, from a present value.

This is done by multiplying the term (1+i)no at present value, that is:

On the contrary, if we want to find the present value knowing the future value, we will do a division, that is:

What was the amount of the last installment paid by the person?

However, the installments were adjusted over the period by monthly interest. Therefore, to match these amounts, we have to know their equivalent values ​​on the same date.

We will carry out the equivalence considering the time of the loan, as shown in the diagram below:

Using the formula for two and three months:

A loan was made at the monthly rate of i%, using compound interest, in eight fixed installments equal to P.

The debtor has the possibility of repaying the debt in advance at any time, paying for this the current value of the installments still to be paid. After paying the 5th installment, it decides to pay off the debt upon paying the 6th installment.

The expression that corresponds to the total amount paid for the repayment of the loan is: 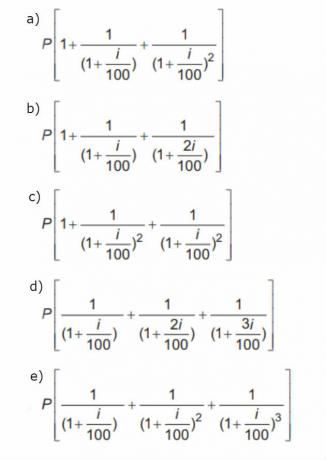 What are Prime Numbers?

Prime Numbers are natural numbers greater than 1 that have only two divisors, that is, they are d... Standard Deviation: what is it, formula, how to calculate and exercises

Standard deviation is a measure that expresses the degree of dispersion of a data set. That is, t...

All about the 2nd Degree Equation

THE second degree equation gets its name because it is a polynomial equation whose highest degree...