THE rule of three is a procedure used for solving problems involving quantities that are proportional.

Because it has a huge applicability, it is very important to know how to solve problems using this tool.

So, take advantage of the annotated exercises and resolved contest questions to check your knowledge of this subject.

To feed your dog, a person spends 10 kg of feed every 15 days. What is the total amount of feed consumed per week, considering that the same amount of feed is always added per day?

We must always start by identifying the magnitudes and their relationships. It is very important to correctly identify whether the quantities are directly or inversely proportional.

To better visualize the relationship between the quantities, we can use arrows. The direction of the arrow points to the highest value of each magnitude.

Let's then solve the proposed exercise, as shown in the diagram below:

Solving the equation, we have:

Thus, the amount of feed consumed per week is approximately 4.7 kg.

See too: Ratio and Proportion

A tap fills a tank in 6 h. How long will the same tank take to fill if 4 taps with the same flow rate as the previous tap are used?

In this problem, the quantities involved will be number of taps and time. However, it is important to note that the greater the number of taps, the less time it takes to fill the tank.

Therefore, the quantities are inversely proportional. In this case, when writing the proportion, we must invert one of the ratios, as shown in the diagram below:

Thus, the tank will be completely full in 1.5 h.

In one company, 50 employees produce 200 pieces, working 5 hours a day. If the number of employees drops by half and the number of working hours per day is reduced to 8 hours, how many parts will be produced?

The quantities indicated in the problem are: number of employees, number of parts and hours worked per day. So we have a compound rule of three (more than two quantities).

In this type of calculation, it is important to analyze separately what happens to the unknown (x), when we change the value of the other two quantities.

By doing this, we realized that the number of parts will be smaller if we reduce the number of employees, therefore, these quantities are directly proportional.

The number of parts increases if we increase the number of working hours per day. Therefore, they are also directly proportional.

In the diagram below, we indicate this fact through the arrows, which point to the increasing direction of values. 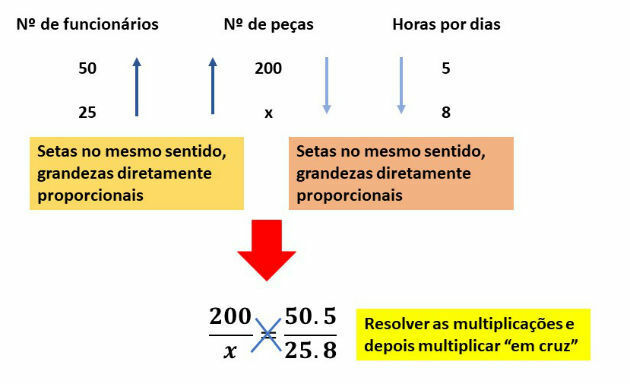 Thus, will be produced 160 pieces.

Two machines A and B of different models, each maintaining its constant production speed, produce n equal parts together, taking 2 hours and 40 minutes simultaneously. Machine A working alone, keeping its speed constant, would produce, in 2 hours of operation, n/2 of these parts.

It is correct to state that machine B, keeping its production speed constant, would also produce n/2 of these parts in

Since the total production time is 2h and 40 min, and we already know that machine A produces itself in 2 hours n/2 pieces, so let's find out how much it alone produces in the remaining 40 min. For this, let's use the rule of three.

Solving the rule of three:

This is the amount of parts produced in 40 min by machine A, so in 2 h and 40 min it alone produces:

It is now possible to calculate how long machine B would take to produce n/2 pieces. For that, let's make a rule of three again:

In one company, 10 employees produce 150 pieces in 30 working days. The number of employees that the company will need to produce 200 pieces, in 20 working days, is equal to

This problem involves a compound rule of three, as we have three quantities: number of employees, number of parts and number of days.

Soon, 20 employees will be needed.

Thus, 5 drains will be needed.

Note in the chart the number of active physicians registered with the Federal Council of Medicine (CFM) and the number number of doctors working in the Unified Health System (SUS), for every thousand inhabitants, in the five regions of Brazil.

SUS offers 1.0 doctor for each group of x inhabitants.
In the North region, the value of x is approximately equal to:

To resolve the issue, we will consider the magnitudes number of SUS physicians and the number of inhabitants in the North region. Therefore, we must remove this information from the graph presented.
Making the rule of three with the indicated values, we have:

Therefore, SUS provides approximately 1 doctor for every 1515 inhabitants in the North region.

At 5:15 pm a heavy rain starts, falling with constant intensity. A swimming pool in the shape of a rectangular parallelepiped, which was initially empty, begins to accumulate rainwater and, at 6 pm, the water level inside it reaches 20 cm in height. At that moment, the valve that releases the flow of water through a drain located at the bottom of this pool, whose flow is constant, is opened. At 6:40 pm, the rain stops and, at that exact moment, the water level in the pool dropped to 15 cm.

The information tells us that in 45 min of rain, the height of the pool water rose to 20 cm. After that time, the drain valve was opened, however it continued to rain for 40 min.

Let's then calculate the height of water that was added to the pool in this time interval, using the following rule of three:

Calculating this rule of three, we have:

Now, let's calculate the amount of water that drained since the drain was opened. This amount will be equal to the sum of water that was added, minus the amount that still exists in the pool, ie:

Therefore, 205/9 cm of water has flown since the drain was opened (40 min). Now, let's calculate how long it will take to drain the amount left in the pool after it has stopped raining.

For this, let's use one more rule of three:

Thus, the pool will be empty in approximately 26 min. Adding this value to the moment that the rain ends, it will empty at approximately 19:6 min.

Correct alternative: e) could have written.The fact that the sentence to be filled in refers last...

The different substances that exist in the universe are composed of atoms, ions or molecules. Che...

Exercises on Organic Chemistry with Template

Organic Chemistry is a wide area of ​​Chemistry that studies carbon compounds.The knowledge of Or...