As the forces are applied to different bodies, they do not balance.

Many situations in the study of Dynamics present interactions between two or more bodies. To describe these situations we apply the Law of Action and Reaction.

By acting in different bodies, the forces involved in these interactions do not cancel each other out.

As the force is a vector quantity, we must first vectorally analyze all the forces acting on each body that makes up the system, marking the action and reaction pairs.

After this analysis, we established the equations for each involved body, applying Newton's 2nd Law.

Two blocks A and B, with masses respectively equal to 10 kg and 5 kg, are supported on a perfectly smooth horizontal surface, as shown in the figure below. A constant and horizontal force of intensity 30N acts on block A. Determine:

First, let's identify the forces acting on each block. To do this, we isolated the blocks and identified the forces, as shown in the figures below: 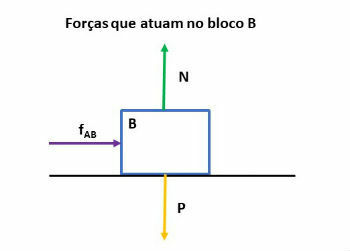 The blocks do not move vertically, so the net force in this direction is equal to zero. Therefore, normal weight and strength cancel each other out.

On the horizontal, the blocks show movement. So let's apply Newton's 2nd Law (FR = m. a) and write the equations for each block:

Putting these two equations together, we find the system equation:

Replacing the given values:

Now, we can find the value of the force that block A exerts on block B. Using the block B equation, we have:

the physicist and mathematician Isaac Newton (1643-1727) formulated the basic laws of mechanics, where he describes the movements and their causes. The three laws were published in 1687, in the work "Mathematical Principles of Natural Philosophy".

The 3rd Law, together with two other laws (1st Law and 2nd Law) form the foundations of Classical Mechanics.

THE Newton's First Law, also called the Law of Inertia, states that "a body at rest will remain at rest and a body in motion will remain in motion unless it is influenced by an external force".

In summary, Newton's First Law points out that it takes the action of a force to change the state of rest or motion of a body.

THE Newton's 2nd Law establishes that the acceleration acquired by a body is directly proportional to the resultant of the forces acting on it.

It is expressed mathematically by:

Block 1, of 4 kg, and block 2, of 1 kg, shown in the figure, are juxtaposed and supported on a flat, horizontal surface. They are accelerated by force

horizontal, with a modulus equal to 10 N, applied to block 1 and they start to slide on the surface with negligible friction. 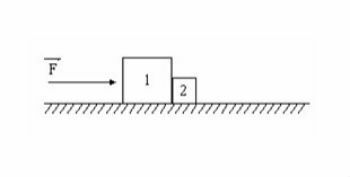 Two blocks A and B are placed on a flat, horizontal and frictionless table as shown below. A horizontal force of intensity F is applied to one of the blocks in two situations (I and II). As the mass of A is greater than that of B, it is correct to state that:

Alternative d: The acceleration of the blocks is the same in both situations. 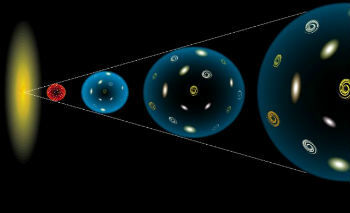 The Big Bang theory is among the most accepted nowadays to explain the origin of the Universe.It ...

Electromagnetism is the branch of physics that studies the relationship between the forces of ele...

Measure Conversion: How to Convert Units

In many situations, we are faced with the need to convert units, which are established models to ...