Protein structure refers to its natural conformation necessary to perform its biological functions.

Proteins are macromolecules formed by the union of amino acids.

In some proteins, replacing one amino acid with another can cause illness and even death.

The spatial structures of proteins result from the folding and folding of the protein strand on itself.

The functional properties of proteins depend on their spatial structure.

The secondary structure corresponds to the first level of helical winding.

It is characterized by regular and repetitive patterns that occur locally, caused by the attraction between certain nearby amino acid atoms.

The two most common local arrangements that correspond to secondary structure are alpha-helix and beta-leaf or beta-pleated. 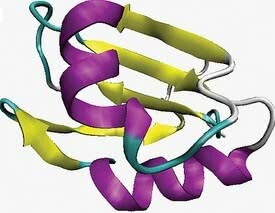 Secondary structure. In purple the alpha-helix conformation and in yellow the beta-leaf

The tertiary structure corresponds to the folding of the polypeptide chain on itself.

In tertiary structure, the protein takes on a specific three-dimensional shape due to the global folding of the entire polypeptide chain.

The quaternary structure corresponds to two or more polypeptide chains, identical or not, that group and fit together to form the total structure of the protein.

For example, the insulin molecule is made up of two interconnected chains. Meanwhile, hemoglobin is made up of four polypeptide chains. 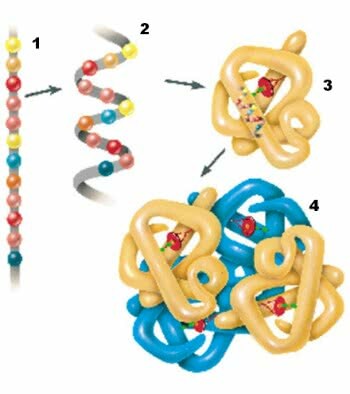 In order to perform their biological functions, proteins need to present their natural conformation.

Heat, acidity, salt concentration, among other environmental conditions can alter the spatial structure of proteins. As a result, their polypeptide chains unwind and lose their natural conformation.

When this occurs, we call it protein denaturation.

The result of denaturation is the loss of the biological function characteristic of that protein.

However, the amino acid sequence is not altered. Denaturation only corresponds to the loss of spatial conformation of proteins.

To learn more, read also about peptides and peptide bonds. 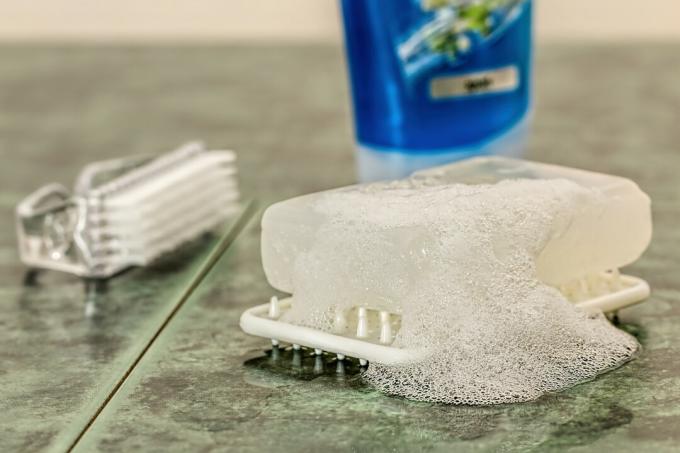 Since the COVID-19 pandemic, a disease caused by new coronavirus, meet 70% alcohol gel it has bee... What is the difference between tuberous root, tubercle and bulb?

If you don't know what the difference between tuberous root, tubercle and bulb, this article was ... THE Water can be found in planet Earth in three different physical states: solid, liquid and gas....