otter It's an animal mammal of semiaquatic habit, being also known as water jaguar and giant otter. This animal is social and monogamous, as well as a carnivore, feeding mainly on fish. To move around in the water, it has a long flat tail and interdigital membranes on its paws. The striking feature of this mammal that allows it to differentiate from other members of the family is the presence of a white spot on the neck. The giant otter is the largest semi-aquatic carnivore in South America.

Read too: lontra — another semi-aquatic animal present in South America

The giant otter is a mammalian animal belonging to the Mustelidae family, the largest and most diverse family of the Carnivora order.. O scientific name of this animal is Pteronura brasiliensis. See below for the complete classification of the otter.

General characteristics of the otter

The giant otters have small, rounded ears, their eyes are large and their feet have an interdigital membrane, another characteristic related to swimming. They can reach about 1.8 meters in length and weigh up to 32 kg. Females tend to be smaller than males, reaching around 1.7 meters in length and 26 kg. When compared to other species of the Mustelidae family, the giant otter stands out as the largest species in the family.

the otter is a South American endemic species, occurring in the past in most countries. In Brazil, it occurred in biomes Cerrado, Pantanal, Atlantic Forest and Amazon, however, mainly due to intensive and indiscriminate hunting, there was a large population reduction. Viable populations are currently observed only in regions of the Amazon Basin and wetland. In other regions, there are isolated records.

the otters have semiaquatic habits, being found inhabiting areas where there are rivers, lakes, streams and seasonally flooded regions. Generally, this species is observed in regions where the water is calmer, with a weak current, without disturbances, with high gullies, where they can build their lairs and where there is a lot of fangs.

Read too: Jaguar — the largest carnivorous animal in South America

Otters are carnivorous animals, that is, they feed on other animals. Your diet is formed in large amounts by fish, but they can feed on other animal groups, such as reptiles, birds, mammals, molluscs and crustaceans. By consuming a large amount of fish, up to four kilos per day, fishermen often kill this animal so that it does not interfere with their fishing.

Otters are animals thatand live in a group, which can present from 2 to 16 individuals. There is a variation in the number of otters in each group according to the region where they are found and the seasons. Otter groups are generally formed by a dominant pair and their descendants. The couples formed are stable, and this species is considered monogamous.

Those animals have daytime habits and they usually hide in burrows at the end of the day, this place being used for rest, as well as for giving birth and caring for the young in the first weeks of life. The burrows are created along the banks of the rivers and, during the flood season, new burrows are built in higher places. In addition to creating burrows, the otters also form latrines, where they deposit feces and urine. Latrines are used to mark territory. These animals have communication skills, using vocalization for this, in addition to marking the territory using odors.

The giant otters live about 11 years in the wild, but they can live up to 20 years in captivity.

Otters are animals that reach sexual maturity at around 2.5 years of age. Despite entering sexual maturity at this stage, mating usually occurs about two years after the beginning of the reproductive capacity. The otters have a pregnancy that lasts between 52 and 70 days.

Generally, from each pregnancy, one to five pups are born. Females normally produce one litter per year; however, if there are problems with the first litter, a second one may occur. At females give birth to their young inside burrows, and they leave that place after about six weeks of life. The chicks begin fishing around three months of age, but remain with their parents until they are two years old. Weaning takes place around 9 months.

In the past, the main threat to the otters was the indiscriminate hunting, for the purpose of marketing your skin. Hunting was also geared towards exhibiting in zoos and raising them as pets.

Although illegal hunting still exists, the giant otters today also suffer from other problems, which are also triggered by man. Among the main problems faced by these animals today, we can highlight the destruction of habitat, contamination of aquatic environments, overfishing and diseases caused by contact with others animals.

Currently, the otter is classified according to the IUCN (International Union for the Conservation of Nature), such as “in danger". This means that if nothing is done by this species, it could go into extinction. Also according to the IUCN, the population trend of the species is decreasing. 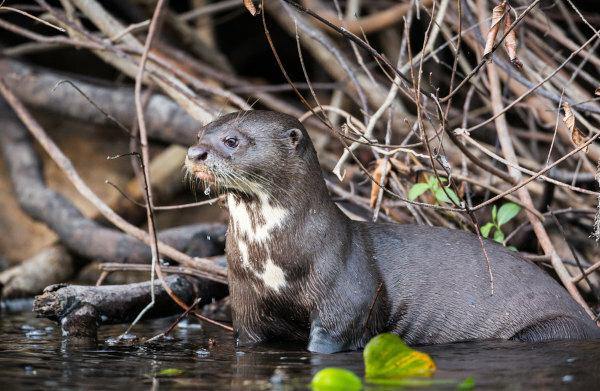 otter It's an animal mammal of semiaquatic habit, being also known as water jaguar and giant otte...