First man to set foot on the moon

On July 20, 1969, Neilarmstrong he became the first man to set foot on the moon. Aboard the Lunar Module eagle, the astronauts Neilarmstrong and BuzzAldrin, both serving the missionApollo 11, landed on the surface of the Moon, carried out several experiments, hoisted the American flag and collected several samples of rocks and the lunar soil.

Neil Armstrong had 39 years old old when he took his first step on the moon. About 20 minutes after his arrival, it was astronaut and pilot Buzz Aldrin's turn. Learn a little more about the life and career of the first man in history to set foot on the moon.

Read too: Myths and truths about the arrival of man on the moon

NeilAldenarmstrong (1930-2012) was born in Ohio, USA, in 1930. His childhood was peaceful, he was a calm child who loved to read. At the age of eight, he went directly from the second to the fourth year of school, he was considered by his teachers as a student "score ten". According to some of the interviews given by his mother, Viola Armstrong, Neil was extremelyfocused in your studies.

Armstrong's childhood was not just about studying. At the age of ten, the future astronaut worked as a lawn mower. Later he was a delivery person for a pharmacy. He also worked as an assistant in a bakery, and was an administrative clerk in a building supply store and a grocery store.

At the age of 17, Armstrong started studying Aerospace Engineering, at UniversityPurdue. Your studies were paid for through a syllabus in which applicants committed to two years of flight training and then to serve for one year in the US Navy in order to earn a bachelor's degree.

Neil Armstrong was drafted into the United States Navy in 1949. After several flights, he was qualified and then graduated as aviatornaval in 1950. He participated in his first war mission in 1951, when he escorted a reconnaissance plane during the Korean War. In all, Armstrong completed 78 missions in Korea, passing about 121 hours up in the air. In this way, he was awarded the Air Medal for standing out as a pilot in military missions.

The still-future astronaut remained in navy service for eight years, until he returned to university to complete his studies. In 1955 he graduated with a bachelor's degree in Aerospace Engineering, five years later he completed his master's degree in the same field at the University of Southern California.

During his graduation, Neil met his wife, Janet Elizabeth Shearon, with whom he had three children: Eric, Mark and Karen, the latter died early after the discovery of a brain tumor that limited her development and her mobility and speech abilities.

After becoming a bachelor, Armstrong went on to act as test pilot, having flown in over 200 different fighter models, revealing to his colleagues and superiors his great flying skills. To learn more about Neil Armstrong, we recommend reading this text: Neil Armstrong: going to the moon, military service, life and death.

See too: 7 questions that Physics has not yet answered

In 1958, Armstrong was selected by the Man in Space Soonest program (MISS), whose aim was to put a human being in space before the Soviet Union did. Shortly thereafter, the US government canceled funding for the program, so the Nasa was able to lead its own space exploration program: the Mercury.

Armstrong was not eligible to become one of the program's astronauts. Mercury, for in it only military personnel were allowed for such a function. However, in 1960, he was selected as a consultant and later invited to act as one of the pilots and engineers on the project. X-20 Dyna Sound, whose intention was the production of a space plane that could be used in recon missions, space rescue, satellite maintenance, bombings etc.

In 1962, NASA announced that it would receive the application of more astronauts, only this time for the program Gemini, and that in this project qualified civilian pilots for the mission would be accepted. Armstrong applied for the job, however, his application arrived a week late. Luckily, a former co-worker saw his application and placed it with the other applications, before anyone noticed the irregularity. On September 13, 1962, civil engineer Neil Armstrong was called to join NASA's astronaut team.. 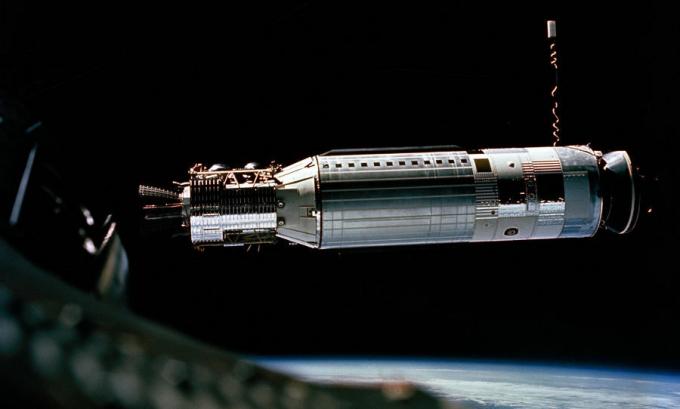 He participated in the reservation team of the manned flight Gemini V, his role as a member of the team was to assist in the manufacture of equipment and procedures necessary for a long-haul manned flight. Armstrong was part of the core team on one of the program's most crucial missions. Gemini VIII. In this case, he and the astronaut DavidScott performed the first spacecraft docking maneuver in Earth orbit.

Read too: Sputnik 1: The first satellite to orbit Earth

Neil Armstrong and the Apollo 11 program

On January 27, 1967, the astronauts Neil Armstrong, Gordon Cooper, Richard Gordon and Jim Lovell they were meeting in Washington for the signing of the Outer Space Treaty. At the time, the astronauts were informed about the Apollo 1 mission failure, which led to the death of the three crew members on the ship.

On April 5, 1967, 18 astronauts from the Apollo program were brought together to discuss the cause of the accident suffered by the crew of the spacecraft launched by the mission. Apollo 1. At that meeting, according to those present, it was stated that the first men who would reach the Moon were in that room.

Despite this, Armstrong did not show any reaction to the phrase, for him this was natural, since the veterans of the Gemini project were the only people in the world able to carry out the missions to the Moon.

In 1968, DonaldSlayton, astronaut and also NASA manned flight supervisor, offered Neil Armstrong the post of commander of the Apollo 11 mission. At the time, the spacecraft Apollo 8 it was orbiting the Moon. A few days later, the crew of the Apollo 11 was officially released and was composed of: Neil Armstrong, Buzz Aldrin and Michael Collins.

During a meeting with the directors of the Apollo 11 mission in March 1969, it was decided that Armstrong would be the first man to set foot on the moon. The directors' justification was the lunar module cabin project eagle, whose disposition would make it difficult for the pilot, Buzz Aldrin, to leave.

The decision was controversial, as Aldrin tried several times to change the landing schedule so that he could be the first man to set foot on the moon. However, the program directors stayed with the project as it was conceived.

In July 16, 1969, at 1:00 pm: 32 min UTC, the rocket Saturn V launched the Apollo 11 spacecraft towards the moon. During the landing, Armstrong realized that the lunar module was falling at a speed greater than planned and could therefore fall many kilometers from its landing site. So he took semi-manual control of the Eagle module and was able to safely land it when he there was only 20 seconds of fuel left.

One of the few photos of Armstrong on the Moon, captured by Buzz Aldrin. (Image credits: NASA / Reproduction)

A few hours after landing, Armstrong emerged from the interior of the lunar module, taking his first step on the Lua, and uttered his famous phrase, which was broadcast live to about 530 million spectators:

“It's a small step for a man, a big step for humanity.”

Even today there is a controversy about the phrase spoken by Armstrong. This controversy is based around the quoted phrase of the astronaut, said right after having stepped on the Moon. While delivering it, Armstrong is believed to have forgotten to use the article “one” before “man” as he could not be heard on the broadcast. Despite the controversy, today, it is believed that the sentence was correctly uttered and that the mistake was due to the technological limitations of the transmission system used at the time.

About 20 minutes after Upon Armstrong's exit, Aldrin exited the interior of the Lunar Module. Along with the first one, he installed several experiments that are present on the Moon's surface to this day. Armstrong hoisted a american flag and left one he scorescommemorative.

Astronauts' time outside the Eagle has been reduced to a few hours due to the extremely high surface temperature of the Sunlit Moon. However, while this side can reach 127º C, some regions on the dark side of the Moon can reach -247º C.

After a little more than 21 hours on the surface from the satellite, the astronauts took off towards the command module, which was in orbit. Aldrin and Armstrong landed in the Pacific Ocean, on July 24, 1969, after a trip that lasted about eight days

Neil Armstrong retired after the Apollo 11 mission. In 1971, the astronaut became teacher and ministered until the year 1979. Even as an old man, he remained active, participating in groups that studied subjects such as aeronautics and space travel. The first man to set foot on the moon died in day August 25, 2012, at 82 years of age.

Read too: Why hasn't man returned to the moon yet?

Astronauts who set foot on the moon

After Neil Armstrong and Buzz Aldrin, more ten astronauts stepped on the lunar surface. All these astronauts were from the Apollo program, that is, in all, 12 people already stepped on the surface of our natural satellite.

Although six manned missions to the Moon were carried out, with three astronauts each, in all of them, one of the astronauts remained in orbit around the Moon, in the command module.
By Me. Rafael Helerbrock

Reiner [or Reinier or Regnier] by Graaf

Dutch physician and anatomist born in Schoonhoven, Neth., who discovered and described the ovaria...