Thermal machines: what they are, mind map and more

Machinesthermals are devices capable of transforming thermal energy into mechanical work. Every thermal machine needs a source of heat and of a working substance capable of having its volume modified and, consequently, moving some mechanism, such as valves or pistons.

You internal combustion engines, like those that drive today's cars, are examples of thermal machines. They absorb the heat that is produced from burning a mixture of fuel and air, which is periodically injected into their cylinders.

In this way, part of the energy that is released during the explosion is converted into work, through the piston movement - one of the moving parts of the engine, used to convert thermal energy into energy kinetics.

How do thermal machines work?

All thermal machines operate according to a cyclethermodynamic, that is, sequences of thermodynamic states that repeat themselves. These cycles have different states of volume, pressure and temperature, which are usually represented by graphs of pressure versus volume. Thermodynamic cycles are designed in search of greater energy efficiency, that is, the production of engines capable of extracting a large amount of work is always sought.

In any thermodynamic cycle, it is possible calculate work graphically. For that, it is necessary to calculate the area of ​​the interior of the graph, which can be complicated to be done, if the cycle in question has some irregular shape. In addition, the direction of the arrows, clockwise or counterclockwise, indicates whether the cycle in question is the cycle of a thermal machine or a refrigerator. Check out:

Every thermal machine has a similar configuration: it has a sourceinheat (hot source), from which it extracts the energy necessary for its operation, and a sink (cold source), where part of the absorbed heat is dissipated. Note the following scheme:

According to the first law of thermodynamics, thermal machines need to receive a certain amount of heat to work. However, only a small fraction of that amount of heat, which is a form of energy, can be converted into useful work.

The reasons for this limitation are essentially two: the first concerns the technical capacity to produce a machine that does not dissipate energy – which is impossible – and the second is a limitation of nature itself: by the 2nd law of Thermodynamics, no thermal machine can present a Yield 100%. Check out what the 2nd law of Thermodynamics says, known as entropy law, according to Kelvin's statement:

"It is not possible for any system, at a certain temperature, to absorb heat from a source and transform it fully in mechanical work, without modifications to this system or its neighborhoods.”

Kelvin's statement concerns the conversionintegral of heat in mechanical work, stating that this is impossible without “changes” occurring in the system. This change refers to the effect of entropy: when removing heat from some hot source, some of that energy is degraded into less useful forms of energy. There are many energy degradation processes: vibration of mechanical parts, friction between parts and bearings, heat dissipated to the external environment, production of audible noises, etc.

See too: Learn about the history of thermal machines 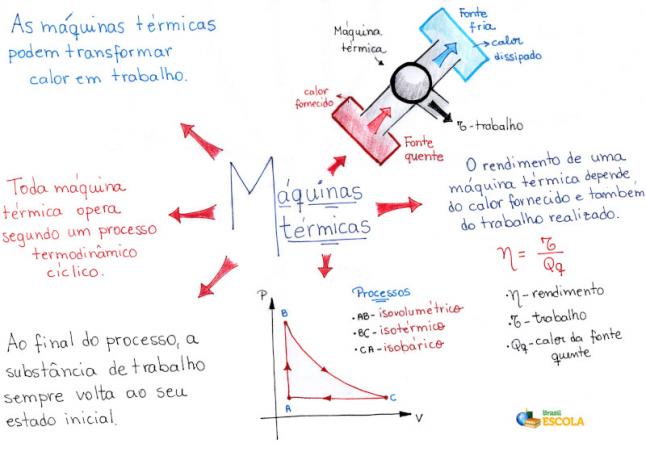 The efficiency of any thermal machine can be calculated as the ratio of the mechanical work it produces to the amount of heat it absorbs from some hot source:

Mechanical work, in turn, is determined by the difference between the amounts of heat “hot” and “cold”, therefore, we can write the performance of thermal machines through these quantities:

QF – heat given to the cold source

Seeking to determine what the characteristics of the “perfect” thermodynamic cycle would be, the French physicist sadicarnot developed a cycle that, at least theoretically, presents the biggerefficiencypossible for a thermal machine that operates at the same temperatures.

This cycle, known as the Carnot cycle, popularly called carnot machine, is not a real machine, since until the present day, technical and practical impossibilities prevented the construction of such a machine.

O theoremincarnot, enunciated in 1824, establishes that even the ideal thermal machine, which does not dissipate any amount of energy due to friction between its moving parts, has a maximum yield limit, which depends on the ratio between the temperatures of its hot and cold source, given in kelvin:

Analyzing the above formula, it is possible to see that the ideal thermal machine has its performance determined exclusively by the temperatures of its hot and cold sources. In addition, for its yield to be 100%, it would be necessary for TF was zero, that is, 0 K, the temperature of absolute zero. However, according to the 3rd Law of Thermodynamics, such temperature is unattainable.

The efficiency formula shown above is only valid for thermal machines that operate according to the Carnot cycle. Furthermore, the theorem also shows that the ratio of temperatures TF and TQ is equal to the ratio between the quantities of heat QF and QQ:

The following figure represents the Carnot cycle and its four stages. Check out: I - Isothermal expansion: In this step, the working substance expands, maintaining its constant temperature, performs work, and receives heat from the hot source.

II - Adiabatic expansion: At this stage, the working substance expands a little and does work without receiving heat.

III - Isothermal contraction: At this stage, the volume of the gas decreases, its pressure increases and its temperature remains constant, in addition, the gas loses heat to the cold source. At this stage, work is carried out on the gas.

IV - Adiabatic contraction: The gas has a rapid increase in pressure and little decrease in volume, but it does not exchange heat during the process.

The Otto cycle is a sequence of physical transformations undergone by some working substance such as gasoline or ethanol. This cycle is widely used in the internal combustion engines that power most passenger vehicles. Although it does not exist in practice, the Otto cycle was designed to approximate a Carnot cycle. The figure below shows the stages of the Otto cycle.

I - Process 0-1: Isobaric Admission: In this process, a mixture of air and gasoline is admitted by the engine at a constant pressure;

II - Process 1-2: Adiabatic Compression – In this process, there is a rapid increase in pressure that is exerted by the engine pistons, so that there is no time for heat exchanges to occur;

III - Process 2-3-4: Combustion at constant volume (2-3) and adiabatic expansion (3-4) - A small spark produces a controlled explosion in the mixture of air and gasoline and then the piston of the engine descends rapidly, causing an increase in volume and producing a large amount of work;

IV - Process 4-1-0: Isobaric exhaustion – The exhaust valves open and let the smoke from the burning fuel exit the engine at a constant pressure.

The steps explained above are shown in the following figure, which represents the operating steps of a four stroke engine, powered by gasoline or alcohol. The movement of the piston in each of the positions shown is equivalent to the processes described: Examples of thermal machines are:

Thermal Machines and the Industrial Revolution

Thermal machines played an important role in the technological development of society. After perfected by JamesWatt, steam-powered thermal machines allowed the Industrial Revolution to happen, radically changing the world.

Refrigerators, or refrigerating machines, are inverted thermal machines. In these devices, it is necessary to carry out work under the gas inside the engine so that it expands by absorbing heat from the surroundings. Examples of refrigerators are: refrigerators, freezers and air conditioning.

If you want to know more about how this type of machine works, visit our text about operation and properties of refrigerators.

Exercise 1) A thermal machine receives 500 J of heat from a hot source each cycle of operation. If this machine dissipates 350 J of heat into its cold sink, what will its energy efficiency be in percentage?

Exercise provides the amounts of heat needed by the machine to operate during a cycle, so we can determine its performance using the formula that relates QQ and QF, Look:

The calculation above indicates that only 30% of the thermal energy available to the motor in each cycle is transformed into mechanical work.

Exercise 2) A machine operating on the Carnot cycle has its hot and cold source temperatures of 600 k and 400 k, respectively. This machine dissipates 800 j of heat to its lowest temperature source each cycle. Calculate the amount of hot heat absorbed by the machine at each cycle and its efficiency as a percentage, then mark the correct alternative.

First, let's calculate the efficiency of the heat engine in question. For this, we will use the temperatures of the hot and cold sources:

Using the temperature values ​​informed in the statement, we have to solve the following calculation:

To calculate the amount of heat that the machine absorbs in each cycle is simple, just use Carnot's theorem:

To solve the calculation, just replace the exercise data in the formula above. We are well aware that water is essential for the maintenance of life on our planet and is essent...

Know that the non-alcoholic drink that conquered the world has very ancient origins, it was in th...

Practice of sticking in the Old Republic. Sticking, an electoral fraud

The period from 1894 to 1930 was known for the dominance of oligarchies in Brazilian states. Thes...