The power of the Catholic Church in the feudal world

The Catholic Church played a preponderant role in the formation of feudalism; in addition to being a large landowner, it structured the medieval man's worldview. In fact, it was the institution that survived the countless changes that took place in Europe in the 5th century. and, by promoting the evangelization of the barbarians, he concretized the symbiosis between the Roman world and the barbarian.

This fact made it heir of classical culture, as in the medieval universe the Catholic Church monopolized knowledge. Without a doubt, its strongly hierarchical structure helped it to overcome all crises, concentrating knowledge and power. Internally there was a division between the high clergy, members of the nobility who held leadership positions, and the lower clergy, composed of people from the poorest segments of the population. The command of this entire structure was slowly concentrated in the hands of the bishop of Rome, who became pope in the fifth century.

To fulfill the mission of evangelization of the barbarian kingdoms between the 5th and 7th centuries, part of the clergy began to live with the faithful, constituting the secular clergy, that is, those who live in the world. However, over time, part of the religious became linked to the temporal and material aspects of the medieval world, that is, to the habits, interests, relationships, values ​​and customs of common men, moving away from the doctrinal and religious.

Alongside the secular clergy appeared the regular clergy, formed by monks who served God living far from the material world, gathered in monasteries. São Bento organized the first monastic order in the West, the order of the Benedictines, based on the rule of praying and working, which means living, in practice, in a state of obedience, poverty and chastity. In fact, monasteries ended up becoming the center of cultural and intellectual life in the Middle Ages and also fulfilled important economic and political functions.

Between the 11th and 13th centuries, the Church underwent several crises and changes. Against the concentration of material powers of the Church, for example, several movements emerged that questioned some Christian dogmas and that is why they were considered heretics. You Cathars, Waldenses, Patarines, among others, they condemned the Church's wealth and did not submit to the authority of the pope. Heretics were fought with extreme violence by the Catholic Church, especially after the organization of the Court of the Holy Office, in the twelfth century, the trial was called Inquisition of the Holy Office. From this crisis came a reform in the Catholic Church, promoted by Pope Gregory IX, in the eleventh century. Among the key points was the issue that feudal lords could no longer appoint the bishops of its region, the end of the trade in religious goods, the imposition of clerical celibacy and the movements of crossed.

There were also movements in the Church against their involvement in material issues and the use of violence against heretics. It was the Franciscans and Dominicans who preached the vow of poverty and that is why they were known as mendicant orders, who mingled with the people, trying to demonstrate the poor and sacrificed life of the Christian. However, they were unable to carry out the definitive moralization of the Church. It can be considered that any movement against the interference of the Catholic church in the material world, begun in the Middle Ages, they ended up giving rise to the great division of Catholics in the 16th century, with the Protestant Reformation. 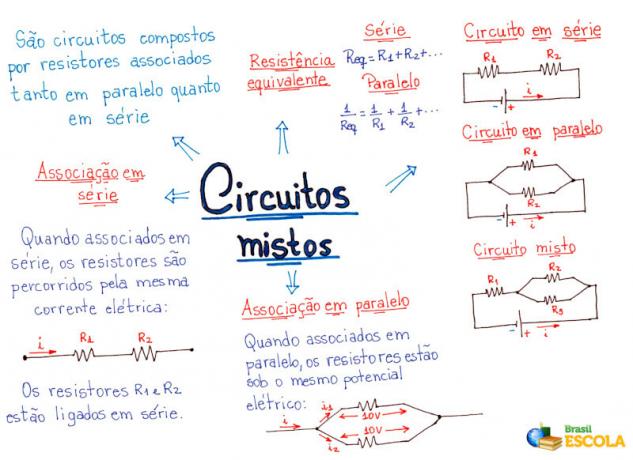 Mixed Circuit. Calculation of equivalent resistance in a mixed circuit

In several situations we can have an electrical circuit made up of resistors connected both in pa...

The text "Molecule with an asymmetric carbon and optical isomers” showed that when a molecule has...

THE War of Ducats occurred in 1864 and placed on opposite sides of the battlefield the Denmark Ag...