The reconquest of Iberian Peninsula by the Christians against the Muslims, who had taken the region from the Visigoths, comprises a series of battles spanning more than 700 years. Among the countless battles fought there is the Battle of Zalaca, which took place in the year 1086.

This battle took place in the region of Sagrajas (for Christians) or Zalaca (for Muslims), near Badajós, Spain, located on the northern border of the territory known as al-Andalus. Preparations for the Battle of Zalaca were part of the context of the retaking of some areas by the king Alfonso VI, from Castile-Leon, which, a year earlier, in 1085, had managed to take the important city of Toledo for Christians.

Alarmed by the successes of the Christians, the Muslim Taifas kings of Seville, Badajoz and Granada asked the Almoravids, led by Yusuf ibn Tashfin. Yusuf arrived in the Iberian Peninsula with approximately 7,000 men from North Africa. Along the way to the region of Sagrajas, he managed to expand his troops to about 30,000 men.

In turn, Alfonso VI awaited Yusuf's military forces with around 60,000 men, stimulated by the victory in Toledo. The battle broke out on October 23, 1086, after Alfonso IV accepted the last of three options presented by Yusuf ibn Tashfin: convert to Islam, pay tribute or fight. King Alfonso IV started the fight early in the morning. Yusuf split his troops into three, leaving the largest, 15,000 strong, fighting Alfonso for most of the morning. In the afternoon, the men he commanded joined the first division, surrounding Alfonso VI's troops. As the offensive increased, the Castilians panicked, prompting Yusuf to order the entry of the third division, formed by 4,000 black Africans armed with Indian swords and long spears.

The result was the resounding victory of Muslims over Christians. It is estimated that a few hundred Christians survived the battle. Among these was King Alfonso VI, who despite having survived, lost a leg in combat.

Muslims even surrounded Toledo, but the loss of an heir to Yusuf in Africa made the Islamic commander to return to the African continent, ensuring that Christians did not lose too many territories. The Battle of Zalaca would mark the intensification of struggles between Muslims and Christians on the peninsula, and the conflicts would only end at the end of the 15th century.

Orthographic Agreement of the Portuguese Language

Much has been said and is said about the new reform in the Portuguese language. Some are in favor... 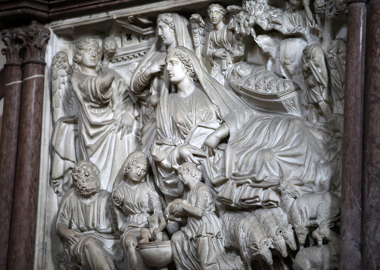 Gothic art. Gothic art at the end of the medieval period

THE gothic art, or the Gothic style, emerged in the north of what is now France, in the 12th cent...

That a cat and a bird are not organisms of the same species we all know, don't we? However, it is...