Diphthong, triphthong and hiatus are vowel encounters, a linguistic phenomenon characterized by the combination, in a word, of vowels and semivowels, without the presence of consonants between them. 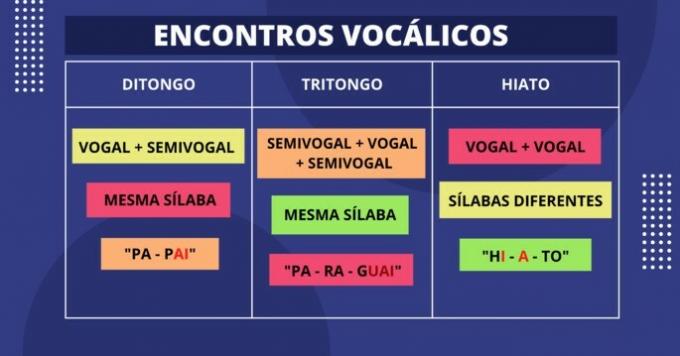 Diphthong is the combination of a vowel and a semivowel in the same syllable.

“Daddy” (pa-pthere), for example, presents a diphthong: in a single syllable, we have the vowel “a”, pronounced in a more intense, tonic, followed by the semivowel “i”, pronounced with less intensity than the vowel, more unstressed.

The word is formed by the prefix say, which means “two”, and tongo comes from the Greek phthongos which is the same as "tone" or "sound". Therefore, diphthong means "that which has two tones".

Occurs when we have a vowel followed by a semivowel in the same syllable. It receives this name because the semivowel sound, being less intense than that of the vowel, creates the impression of a decrease in sound.

happens when the semivowel comes before the vowel in the same syllable. It receives this name because the passage from a weaker sound (semivowel) to a stronger one (vowel) generates the impression of sound growth.

are the diphthongs pronounced exclusively by mouth, orally.

are the diphthongs pronounced through the mouth and nose, in an nasal manner. The consonants "m" and "n" can assume the function of semivowels in nasal diphthongs, as in "pensam" (pen-sam), for example.

Triphthong is the ccombination of two semivowels and a vowel in the same syllable.

"Paraguay" (Pa-ra-gwow) is an example of a triphthong: in its last syllable, we have the semivowels "u" and "i" combined with the vowel "a".

triphthongs pronounced through the mouth and nose, in an nasal manner. In some cases, the consonants "m" and "n" can assume the function of last semivowel of nasal triphthongs, as in "minguem" (min-gwow), for example.

The hiatus occurs when two vowels that, being together in a word, are separated in syllabic separation.

"Rabbit" (cO-and-lho) is an example of a hiatus. The vowels "o" and "e", despite being together in the word, are in different syllables in syllable separation.

The word "hiatus" comes from the Latin hiatus, which means "gap", "empty space", "gap". This type of vowel encounter gets its name from the pause in the pronunciation between the two vowels that compose it, especially during syllable separation.

Diphthong, triphthong and hiatus are vowel encounters, a linguistic phenomenon characterized by t...