To say that a body has moved means that its position has changed in relation to a reference, and this change can be of distance or approach, so it is common to determine a direction (positive or negative) for the trajectory.

The trajectory is the path that the mobile travels, which may or may not be rectilinear. This trajectory is oriented, that is, it has a positive direction, which is the increasing direction of the positions.

Category of motion where the direction is equal to the positive orientation of the trajectory. That is, when the mobile advances to “the same side”. 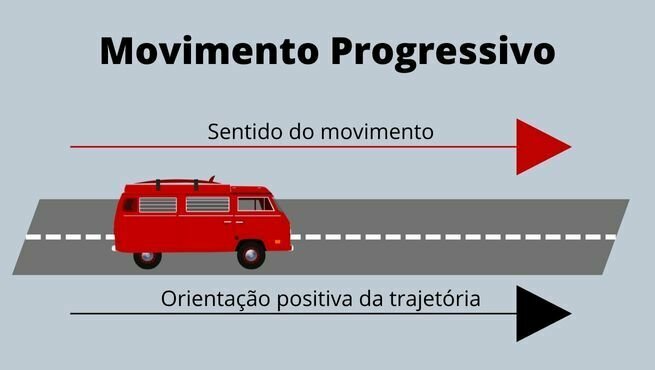 Category of motion where the direction is contrary to the positive orientation of the trajectory. That is, when it advances to “the opposite side”. Example of progressive and retrograde movement

A bus leaves from city A towards city B. A positive orientation from A to B is adopted. This means that spaces increase and advance from A to B.

In the situation where the bus goes from city A to B, the direction of movement is the same as the trajectory, being progressive.

In the situation where the bus returns from city B to A, the direction of movement is opposite to that of the trajectory, being retrograde.

The speed in progressive and retrograde movements

In practice, velocity cannot be negative, its sign only denotes the direction of movement, contrary to the orientation of the trajectory (“mobile returning”).

The motion is uniform (MU) when the velocity is constant (zero acceleration), resulting in covering spaces of the same distance in the same time.

Motion is uniformly varied (MUV) when its velocity is varied, changes, resulting in moving larger or smaller spaces each unit of time. How much it advances at each instant is standardized by the acceleration that is constant (variable speed and constant acceleration).

The classification between progressive and retrograde does not relate to the fact that the movement is uniform, uniformly varied or any other, as it is not related to acceleration but to the direction of motion and the orientation of the trajectory.

How to solve exercises on Newton's laws?

For solve exercises on the applications of Newton's Laws, as in block systems, it is interesting ...

Vertical launch: what is it, formulas and exercises

O launchvertical it is a one-dimensional movement in which the friction with the air. This type o...

In the study of Physics, to be well characterized, there are quantities whose measurements need ...