Papyrus: what it is, history, production, use

Papyrus was the name by which the leaves produced in the Ancient Egypt used in writing. These leaves were made from the stems of papyrus, a plant that was commonly cultivated in Egypt. The papyrus plant had several uses for the egyptians, in addition to being considered sacred.

Papyrus sheets were produced in a long process that required workers with excellent manual skills, which made the price of this commodity very high. The papyrus sheets were mainly used in religious and governmental texts. Those responsible for using these sheets, the scribes, underwent a long training.

When we refer to papyrus, many remember the papyrus sheets that the Egyptians used to record their writing. However, in addition, the papyrus is a plant, call of cyperus papyrus, which was abundant in Ancient Egypt. It is an aquatic plant that was found in the marshy regions of the banks of the rthe Nile and in the Nile Delta.

The papyrus plant had numerous uses in Ancient Egypt. In addition to being the raw material for papyrus leaves, this plant It was also used as food and to produce objects such as rugs, sandals, curtains, etc.

The Egyptians considered papyrus a sacred plant, which had a strong connection with the egyptian religiosity. The papyrus plant symbolized eternity, that is, the afterlife. Furthermore, the Egyptians associated papyrus thickets with the forces of chaos. The pharaohs constantly organized hunts in the midst of these thickets to symbolically impose themselves against the chaos.|1|

The papyrus sheets were a commodity of great value, used, therefore, only by those who had a lot of money. This commodity was often purchased by greeks and Romans, and the name of this item was given by the Greeks.

You greeks named the papyrus sheets in reference to the word papuro, used to define royalty or things connected with the pharaoh. This is because the Greeks identified that everything related to the cultivation of papyrus and the production of leaves was controlled by the Egyptian rulers. The plant was called djet, wadj or tjufi.

The production of papyrus sheets is believed to have started around 3000 BC. C., but many historians affirm that the production is previous to that date.

THE Egypt was the major producer of papyrus in THEseniority, and this is attributed to the importance of this plant to the Egyptians. Papyrus plants were cultivated on farms by the Egyptians, and cultivation is believed to have started sometime in the Predynastic period, which extended from 6000 BC. Ç. to 3500 a. Ç.

The plants created in these places were cut so that the process of producing papyrus sheets could be carried out. THE papyrus plant can reach up to 5 meters in height, and the production of papyrus leaves took place using the stems of the plant.

First, the plant was cut, and then the stem was separated for the process. It was necessary for a person with good manual skills to handle the stems, as it was necessary to remove a thin layer of the papyrus stem's hull. Once this green hull was removed, the stem was cut into small strips.

These strips were placed side by side to form a first vertical layer. Then a second layer of strips was laid horizontally on top of the first. The strips were then pressed and placed on the Sun to dry. It was traditional for the Egyptians to produce 20 sheets of papyrus spliced ​​together to form a small roll.

The roll was the traditional way of handling papyrus sheets. Although it was common to make papyrus with 20 sheets, historians are aware of papyrus rolls that reached tens of meters.

Once the papyrus sheets were ready, they could have four destinations: be sent to government buildings; for religious temples; to the market to be bought by ordinary people; or else be sent for import. As mentioned, the Greeks and Romans were great buyers of Egyptian papyrus.

THE record job dand information on papyrus was an obligation of scribes, but these professionals underwent a very rigorous training. Only after years of practice in writing on other surfaces could they use papyrus. These scribes practiced mainly on surfaces of wood and stone.

The papyrus sheets were mainly used for matters related to the government and the religion. Thus, papyri were used for governmental texts, hymns and other religious texts and magical rituals, but they were also used for medical texts, literature and even for person recordsis, like letters.

along the Middle Ages, the papyrus it lost space for the parchment, writing surface made of leather animals. Parchment was known for being more resistant and durable and for allowing texts to be erased in order for new ones to be written.

Acrostic: what is it, types, acrostic x acronym

THE acrostic can be understood as a poetic resource in which a letter of each verse forms, vertic...

THE elastic force and the force reaction of elastic materials, which is contrary to the external ... 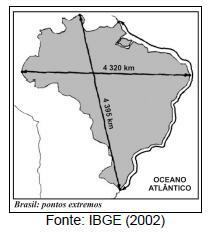 Extreme points in Brazil: what are they?

You extreme points of Brazill correspond to those localities located on the northern, southern, e...