Read too: Genes - what's yours? importance nothe determination of the characteristics of living beings?

Nucleic acids are formed by joining together smaller molecules called nucleotides. Nucleotides are generally made up of three parts:

Nucleotides are joined together to form polynucleotides. Adjacent nucleotides form a bond between the phosphate group of one nucleotide and the pentose group of the next nucleotide. This bond is responsible for forming the sugar-phosphate backbone.

Also access: Chromosomes — structures made up of DNA and proteins

DNA and RNA: Nucleic Acids Made of Nucleotide

The difference between these two types of sugar is that deoxyribose has one less oxygen atom attached to the second carbon atom of the ring.

We can conclude, therefore, that adenine, guanine and cytosine are observed in both DNA and RNA, whereas the thymine is found only in DNA, and uracil only in RNA.

The molecules of RNA, unlike DNA molecules, are not in a double helix. RNA occurs in single chain.Base pairing can occur in RNA, leading to the formation of three-dimensional structures. Transfer RNA, for example, has a shape resembling an L, and pairing is observed in some regions. In RNA, the adenine pairs with uracil, since thymine is not present.

It is worth noting that during the transcription process (RNA production), the two strands of the DNA molecule separate. at certain points, and the bases of the RNA nucleotides pair with their complements present in the RNA chain. DNA. The nucleotides join together, causing the synthesis of the RNA molecule, which is detached from the DNA molecule. The link between the two strands of DNA is then re-established.

(Unicentro) According to the DNA model proposed by James Watson and Francis Crick, the molecule is formed by two long chains arranged in the form of a double helix. A given chain has a sequence of nucleotides formed by a phosphate group, a deoxyribose and a nitrogenous base that can be of four types:

Uracil is a nitrogenous base present only in RNA. Alanine and phenylalanine are amino acids. Thus, the alternative that represents nitrogenous bases present in DNA is the letter E.

Alberto Caeiro is one of several heteronyms of the Portuguese writer Fernando Pessoa. According t...

Brazilians who have not completed primary or secondary education at school age have the possibili... 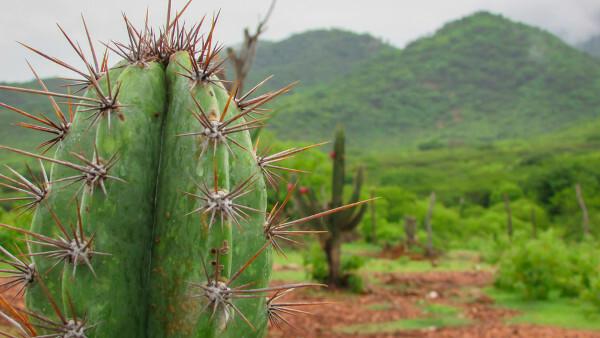 THE semi-arid climate occurs in areas of high pressure, between the 20º and 30º parallels, in bot...