Quincas Borba is a realistic novel of Machado de Assis. It tells the story of Rubião, a teacher from Barbacena who inherits the assets of his friend Quincas Borba, with the condition of taking care of the deceased's dog, which has the same name as the owner, that is, Quincas Borba.

The new rich, then, moves to Rio de Janeiro and starts to be explored by “friends”, such as Sofia and Cristiano Palha. Thus, amidst ironies, the narrator tells the gradual process of derangement of Rubião, who, at the end of the story, believes to be the French Emperor Luís Napoleão (1808-1873).

Read too: Dom Casmurro — another masterpiece by Machado de Assis

Video lesson with the literary analysis of Quincas Borba

Analysis of the work Quincas Borba

→ Characters of the work Quincas Borba

The narrative takes place in the second half of the 19th century, but the narrator specifies only these years:

The action takes place in Barbacena, in the state of Minas Gerais, and, mainly, in the neighborhoods of Botafogo and Flamengo, in the city of Rio de Janeiro.

→ plot of the work Quincas Borba

O book starts when Rubião is already a rich man. So, the narrator invites us to go back in time to understand how the protagonist got there: “Let's leave Rubião in Botafogo's living room, hitting his knees with the tassels of the dressing gown, and taking care of the beauty Sofia. Come with me, reader; we're going to see him, months before, at Quincas Borba's bedside”.

Thus, we found that, in Barbacena, Rubião tried to marry his sister to his friend Quincas Borba, but she ended up dying. The professor, as Quincas Borba's only friend, took care of the patient for nearly six months. However, Rubião had a rival, the dog Quincas Borba, who also occupied the philosopher's heart.

With the death of philosopher Quincas Borba, Rubião was named his universal heir. At this point, the shrewd reader and reader are suspicious of Rubião's generosity in taking care of his sick and rich friend. However, the will indicated a condition for Rubião to receive the inheritance, that is, to take care of the dog Quincas Borba.

Rich, the protagonist moved to Rio de Janeiro. On the train, he met a dishonest couple: Sofia and Cristiano Palha. During the trip, the former teacher turned out to be an heir. From then on, the couple began a strong friendship with Rubião, and Sofia, with Palha's approval, began to seduce the new rich man, with the intention of receiving financial benefits for her husband.

Thus, the narrator arrives at the beginning of the book — when Rubião is in Botafogo's living room — and starts to narrate from “the same place in which we left him sitting, looking far, far away”. Then, he introduces the protagonist's two new friends: the vain Carlos Maria and the sycophant Freitas. Besides them, Rubião also befriends the self-interested Camacho.

On the way to Camacho's office, Rubião, on an impulse, saves the boy Deolindo's life. His act of heroism ends up in the pages of a newspaper, the watchtower. This awakens the vanity of the protagonist, who surrenders to false modesty, shortly after meeting Maria Benedita, Sofia's cousin.

As a result, we noticed a love affair between Carlos Maria and Sofia, in addition to learning about Palha's intention to marry his now partner Rubião to Maria Benedita. At this point in history, the protagonist's madness begins to manifest itself. And when some friends, who have the habit of having dinner at his house, go to shake his hand, "Rubião had an inexplicable impulse here, — to give them a hand to kiss."

During the narrative, Maria Benedita, assisted by D. Fernanda ends up marrying Carlos Maria. From then onwards, Rubião's madness increases, and he starts to believe that he is the French Emperor Louis Napoleon. So, when he is mocked in the street by some children, Rubião experiences an irony of fate:

One of them, much smaller than all of them, clung to another's trousers, tall. It was already on Rua da Ajuda. Rubião continued not to hear anything; but once she heard it, she assumed they were acclamations, and made a courtesy of thanks. The fuss increased. In the middle of the noise, a woman's voice could be heard at the door of a bedding:

Deolindo, the child who clung to the older girl's pants, did not obey; maybe he didn't even hear, such was the scream, and such was the joy of the little one, clloving with the little voice:

THE protagonist's death also features irony, now from the narrator, who reports it this way:

Before the agony began, which was short, he put the crown on his head—a crown that was not, at least, an old hat or a basin, where the spectators felt the illusion. No sir, he took nothing, lifted nothing and girded nothing; only he saw the imperial insignia, heavy with gold, brilliants and other precious stones. The effort he had made to lift half his body did not last long; the body fell again; his face perhaps retained a glorious expression.

The face became serious, because death is serious; two minutes of agony, a horrible grimace, and the abdication was signed.

In this way, the narrator mentions the abdication of the French emperor as a metaphor for Rubião 's death, member of the bourgeois elite, with a mania for grandeur and the certainty of being deserving of his fortune. Such an attitude is in keeping with Quincas Borba's philosophy — Humanitism — exemplified by a story fictional story about two tribes fighting over a field of potatoes, which gives rise to the memorable phrase: “To the winner, the potatoes".

→ narrator of the work Quincas Borba

the narrator of the novel Quincas Borba it is a omniscient narrator, that is, has full knowledge of facts and characters. However, he is ironic and likes to manipulate female readers, with whom he sometimes dialogues.

→ Characteristics of the work Quincas Borba

Quincas Borba, published in 1891, is a romance monophonic and psychological, since the narrative is centered on the protagonist Rubião. The work shows, in an analytical way, the gradual madness of this character. Thus, the narrator enters his mind, as if he were a scientist who seeks to understand madness.

In the book, divided into 201 chapters, the chronological time stands out, since the narrator, despite starting the narrative at the moment when Rubião is at its peak, it tells the story of the protagonist, gradually, from his life in Barbacena to his death. Furthermore, this realistic work presents anti-romantic character, psychological analysis, social criticism and irony.

film of the work Quincas Borba

Machado de Assis (Joaquim Maria Machado de Assis) was born on June 21, 1839, in Rio de Janeiro. He was the son of Brazilian Francisco José de Assis (1806-1864) and Azorean Maria Leopoldina Machado da Câmara (1812-1849), who lived as members of the farm of Maria José de Mendonça Barroso, widow of a senator.

But it was the novels of the realist phase that made Machado de Assis, a author who started his literary career with romantic works. Thus, books such as The Posthumous Memoirs of Bras Cubas (1881), Quincas Borba (1891) and the famous Dom Casmurro (1899).

One of the rare black men to be recognized and consecrated as a great author and intellectual in the 19th century, Machado de Assis entered history as one of the founders of the Brazilian Academy of Letters, in 1896, and was the first president of that institution, before he died on September 29, 1908, in Rio de Janeiro.

The main historical facts that led to the emergence of realism in Brazil they are:

These events brought about the end of the decaying Brazilian monarchy and the conservatism it represented. With her, the Romanticism, which gave way to a new aesthetic, more committed to reality and willing to make a forceful social criticism.

Brazilian physician born in Paracatu, Minas Gerais, who published a manual that can be presented ...

French chemist born in Cherbourg, professor at the University of Nancy (1909-1932) and one of the... 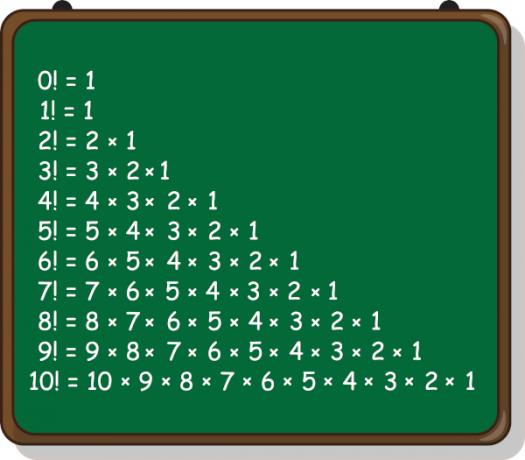 Factorial: what is it, how to solve, simplification

calculate the factorial of a number only makes sense when we are working with natural numbers. Th...