Relationship between polarity and solubility of substances

THE solubilitycan be defined as the maximum possible amount of a solute that can be dissolved in a certain amount of solvent at a given temperature.

This maximum amount that can be dissolved is also known as solubility coefficient or solubility degree. But the solubility of any substance depends, among other things, on the type of solvent in which the solute is dispersed.

For example, NaCl (sodium chloride - table salt) is very soluble in water, and in 1 L of water at 20ºC, we can solubilize up to 360 grams of this salt. But when the solvent changes to gasoline, under the same conditions of volume, temperature and pressure, the salt does not dissolve.

Why does the solubility of a substance vary so much from one solvent to another?

One of the factors is the polarity of the compounds involved. In the example cited, we have that the salt is polar, water is polar, and gasoline is non-polar. Salt is formed by atoms of sodium (Na) and chlorine (Cl) that bond through ionic bonds, in which sodium definitely donates an electron to chlorine, forming Na ions

instagram story viewer
+ and Cl-. As these ions have opposite charges, they attract and hold together (Na+Cl-). 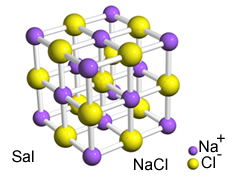 This shows us that salt is really polar, every ionic bond is polar, as there is a difference in electrical charge in the compound. Gasoline, on the other hand, is formed by a mixture of different hydrocarbons, which are non-polar, that is, the distribution of the electric charge of gasoline is uniform. Thus, there is no interaction of the salt ions with gasoline and it does not dissolve.

These and other similar cases lead us to the following conclusion:

However, this cannot be considered a general rule, as there are many cases of non-polar solutes that dissolve well in polar solvents and vice versa. So, to understand why this occurs, we have to consider yet another factor: the type of intermolecular force of the solvent and the solute.

Law about this in the text: "Relationship between Intermolecular Strength and Solubility of Substances”. In the English language, there are verbal forms, among which the past participate. This verb form...

Variance. How is the variance of a population calculated?

Within Statistics, there are several ways to analyze a set of data, depending on the need in each... Yellow September: what it is, importance and goals

September is the month in which the awareness campaign on suicide prevention is carried out, the ...