June festivals are celebrations that take place in the month of June in Brazil. It commemorates three popular saints: Santo Antônio, São Pedro and São João.

The origin of the June festival is pagan, that is, it is contrary to Christian doctrine, because the festivals that gave rise to the June festivals they honored the gods of nature and fertility and asked for plenty in the crops, as it was then that the harvest period began. of cereals.

But, as the church could not end the popularity of this festival - which appeared hundreds of years ago -, it ended up joining it and giving it a religious character.

Traditionally, the June festivities start on June 12, the day before St. Anthony, and end on June 29, St. Peter's Day. On the 23rd and 24th, St. John's Day is celebrated.

Origin of the June Party

The origin of the June festival is pagan and, therefore, did not have the religious character that it assumed years later, and which continues to this day.

Even before the Middle Ages, in the northern hemisphere, people celebrated the arrival of summer - in the month of june - honoring the gods of nature and fertility while asking for a harvest fed up.

This was because it was the time of harvest for cereals, such as corn - which today is the most common ingredient in typical June festival foods.

Bonfires, a characteristic symbol of June festivities today, also have their origins in the pagan festival, because it was customary to make bonfires during celebrations.

As the church could not end the popularity of this pagan festival, it ended up adhering to the June festivals, giving them a religious character.

In Brazil, June festivals were introduced by the Portuguese in the colonial period. In Portugal, the Festa Junina was called Festa Joanina, possibly because it takes place in June or perhaps because of Saint John, who is the main saint of the celebration; which is why the June festivals are also called the Festa de São João.

The three Catholic saints - São João, Santo Antônio and São Pedro - were chosen to be commemorated in the June festival because they were the most popular saints in the month of June.

São João would have been born on June 24 and is very popular among the Portuguese, who had many kings with that name, who built chapels in honor of the saint.

Saint Peter, martyred on June 29, is considered the church's first Pope. Santo Antônio, in turn, who died on June 13, was born in Lisbon.

Since the June festivities were brought by the Portuguese, the commemoration was influenced by the African and indigenous cultures and, therefore, it has peculiar characteristics in each part of the Brazil.

Many traditions that accompany this celebration represent the main symbols of the June festivals which include: the food, the typical dances, the balloons, the bonfire, the games and the clothes.

O corn it is a very important food in these celebrations and, therefore, many typical foods of the June festival take this ingredient.

The most traditional drinks are: hot and mulled wine. 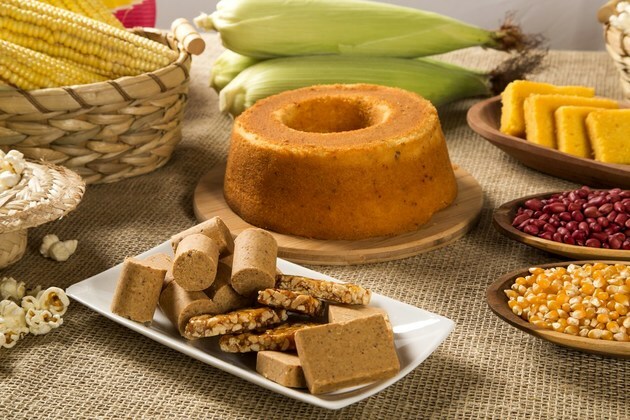 All these elements help to compose the environment of the party, called arraial. This is where the typical food and drink stalls are decorated with flags from June.

In June festivals you can hear and dance forró. THE gang junina is, however, the typical dance of the party. It has its origins in ballroom dances in France and consists of a ballet of couples dressed in typical country clothes. 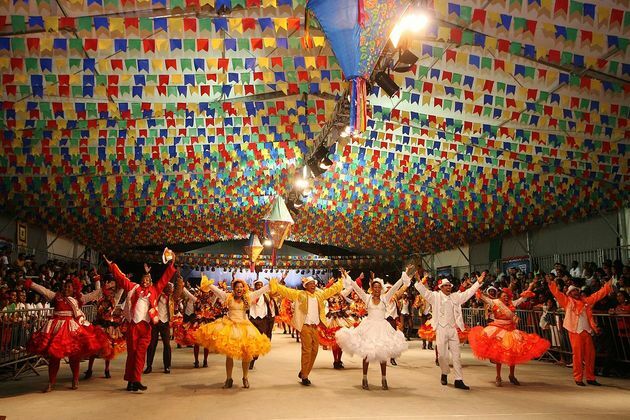 A choreography called weddingbumpkin is made in honor of Santo Antônio, the matchmaker saint.

3. Balloons & bonfire at the June party

You balloons are traditional, although currently there are restrictions for security reasons. Traditionally, the release of balloons indicates the beginning of celebrations.

THE fire pit it's also part of the party scene. Of pagan origin, it symbolizes protection from evil spirits. 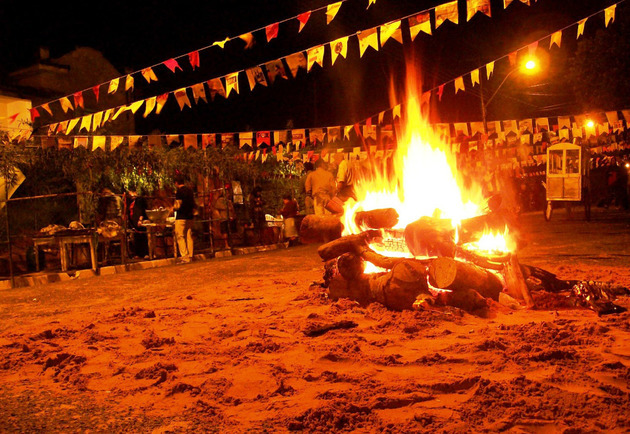 The tradition was maintained by Catholics, who dedicated a different form of bonfire to each saint: the square is by Santo Antônio; the round of St. John; and the triangular São Pedro.

jokes such as jail, tallow sticks, fishing, elegant mail, jumping the bonfire, rings, among others, cannot be missed. Also included are sympathies - which end up carrying a bit of the fun tone. 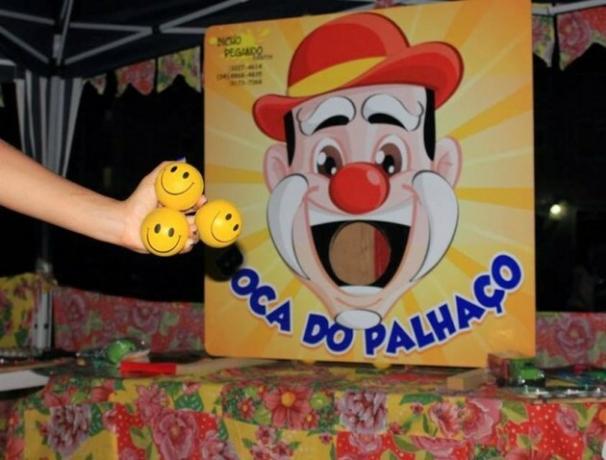 On June 13, the churches distribute the “Pãozinho de Santo Antônio”, which should be eaten by women looking for a husband.

The traditional clothes of the June party are typically rustic, with colorful clothes and a checkered print. 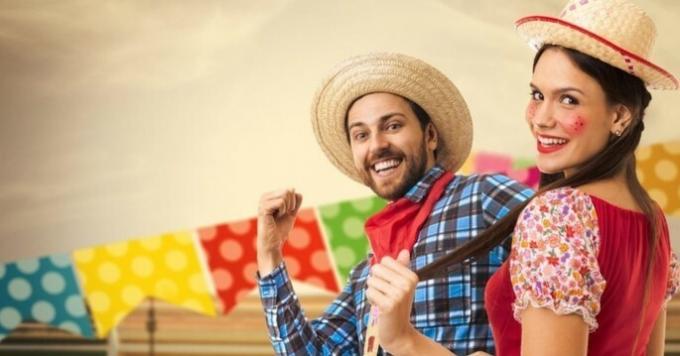 Women wear colorful dresses and hair braids. Men tend to wear a plaid shirt and a straw hat. Both wear makeup to mimic freckles (on women) and mustaches (on men).

The famous feast of St. John

Inserted in the context of June festivities, the Festa de São João takes place on the 23rd and 24th of June, to celebrate the birth of this Popular Saint, known as the Holy Party.

St. John was born would have been born on June 24 and was one of the closest saints to Jesus Christ, participating in his baptism on the banks of the River Jordan. That's why St. John's Day is June 24th.

The main elements of the feast of St. John

The festivities of the party include typical dishes from the June festival, games and the São João square, as a traditional dance. However, it is worth remembering that this can change from region to region.

In addition, other important elements of the festival are the mast and the São João bonfire.

O St. John's mast includes the image of this popular saint, together with three more colored flags or ribbons, representing the popular saints of the festival: Santo Antônio, São Pedro and São João.

THE St. John's Bonfire, another very characteristic element of the party, is lit on the night of the 23rd. Among many sympathies associated with it, the one that stands out the most is jumping off the fire on the 24th.

The feast of St. John in the Northeast

In Brazil, the most famous São João night takes place in the northeast of the country, in the city of Campina Grande, in the state of Paraíba. This is considered the biggest feast of St. John in the world.

However, other northeastern cities stand out: Caruaru, in Pernambuco; São Luís, in Maranhão; Mossoró, in Rio Grande do Norte; and Teresina, in Piauí.

13 popular festivals that are part of Brazilian folklore

congada, congado or Congo, is a cultural and religious expression that involves singing, dancing,... 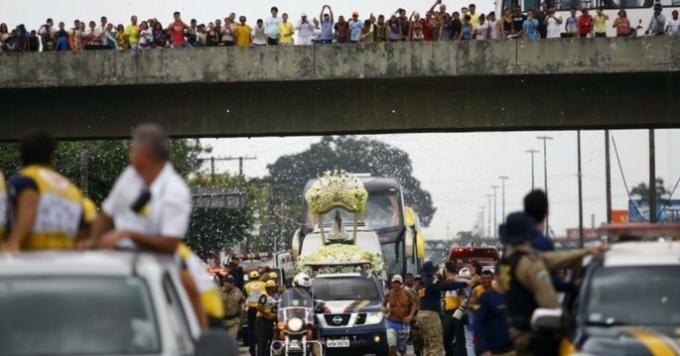 The Círio de Nazareth is a Catholic procession that takes place every year in Belém do Pará, in N...