O blood it is a liquid tissue formed by different types of cells suspended in the plasma. It circulates throughout our body, through our veins and arteries.

The cells, on the other hand, receive blood through smaller blood vessels called arterioles, venules and capillaries.

An adult circulates, on average, six liters of blood.

One of the basic functions of blood is the transport of substances, of which the following stand out:

Blood plays an important role in defending the body from the actions of harmful agents.

Blood looks like a homogeneous liquid, however, with a microscope observation it can be seen that it is heterogeneous, being composed of red blood cells, white blood cells, platelets and plasma.

Plasma, corresponding to 60% of the blood volume, is the liquid part where red blood cells, white blood cells and platelets are suspended. The amount of each component may vary depending on the person's sex and age.

Some diseases, such as anemia, can also cause changes in the normal values ​​of blood components.

Red blood cells, also called Red Cells, are cells in greater quantity in humans. They are shaped like a concave disk on both sides and have no core.

They are produced by bone marrow, rich in hemoglobin, a protein whose red pigment gives the blood its characteristic color. It has the property of transporting oxygen, playing a fundamental role in breathing.

White blood cells, also called leukocytes are produced in the bone marrow. They are the body's defense cells that belong to the immune system.

They destroy foreign agents such as bacteria, viruses and toxic substances that attack our bodies and cause infections or other illnesses. In addition, they also play an important role in blood clotting.

In the blood there are several types of leukocytes with different shapes, sizes and shapes of nucleus: neutrophils, monocytes, basophils, eosinophils and lymphocytes.

Leukocytes are larger than red blood cells, however, the amount of them in the blood is much smaller. When the body is attacked by foreign agents, the number of white blood cells increases significantly.

At platelets, also called thrombocytes, are not cells but cell fragments. Its main function is related to the blood clotting process.

When there is an injury, with rupture of blood vessels, platelets adhere to the injured areas and produce a network of extremely fine threads that prevent the passage of red blood cells and retain the blood.

Platelets are present in every drop of blood and their number is approximately 150,000 to 400,000 platelets per cubic millimeter under normal health conditions.

O plasma it is a yellow colored liquid and corresponds to more than half the volume of blood.

It consists of a large amount of water, more than 90%, where the nutrients (glucose, lipids, amino acids, proteins, salts) are dissolved. minerals and vitamins), oxygen gas and hormones, and waste produced by cells, such as carbon dioxide and other substances that must be eliminated from the body.

You blood types they are blood classification systems. They were discovered in the early 20th century by physician Karl Landsteiner.

For the human species, the most important blood types are the ABO System and the Rh Factor.

At the ABO system, for example, there are four blood types: A, B, AB and O. Possible types of compatible donations are:

Meanwhile, the Rh factor it works independently of the ABO System, and is related to the production of an antigen located in the plasma membrane of red blood cells. 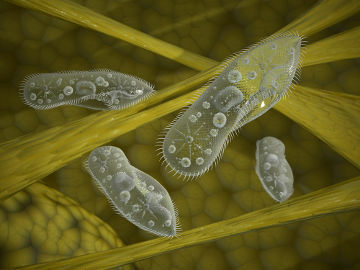 O biological clock it is a mechanism governed by the sequence of hours of the day, which is prese...

The degradation of ecosystems in general is increasingly worrying, and its (harmful) effects on l...