Light absorption: what it is and its relationship to colors

THE absorptiongiveslight is a process by which the light that focuses on a body is converted into energy. It can occur by any body or substance, however, the way light is absorbed depends on its frequency as well as the nature of the atoms in the body that are illuminated.

When light is absorbed, the electrons start to oscillate and emit heatFor this to happen, the light that falls on a particular material must have an oscillation frequency close to the frequency at which the electrons in the atoms of that material vibrate.

THE color of illuminated objects, that is, that do not produce their own light, depends on the frequency they are able to absorb — a blue-colored object, for example, it is not able to absorb light whose frequency corresponds to the blue color, so this light is reflected and the object is seen in such coloring.

See too: How are polar auroras formed?

What is light absorption?

instagram story viewer
, so that some portion of the energy carried by this light remains retained in it. Materials capable of absorbing visible light are called opaque.

The electrons of the atoms that form the opaque media absorb certain frequencies of light, as long as the energy present in it is close to the energy of the electrons. Once absorbed, the light causes the electrons to become more agitated until, when they relax, they emit new ones. electromagnetic waves of lower frequency, thus producing a weak heating of the medium.

Currently, the corpuscular theory of light allows us to understand that the phenomenon of light absorption is, in fact, a phenomenoncorpuscular, in which light behaves as a set of particles known as photons. In this type of phenomenon, only photons that present an amount of energy exactly equal to the energy difference between two or more are absorbed. excited states of the electrons.

Some optical media are capable of absorbing a large spectrum of light frequenciesvisible. visibly speaking, these means are black, since all, or a large part, of the radiation that illuminates them is reflected or captured by their atoms and electrons, being consequently transformed into thermal agitation.

It can be said that the bodies that do not produce their own light do not have a color of their own. The color of these objects, known as secondary sources or illuminated bodies, directly depends on how they interact with the incident light.

If some material absorbs all frequencies of light equally, then it will look black to us, however, if it is not able to absorb some frequency range of visible light, such as red, this material will be seen in red color, since all the red radiation that falls on it will not be absorbed, but rather reflected.

That's why dark or black-painted objects tend to get hotter — they're capable of absorbing a wide range of frequencies of visible light, and thus its electrons become more excited and produce even more thermal agitation than an object reflector.

Objectsenlightenedandwhites, like a painted wall, for example, they don't absorb a light frequency more efficiently than others, so all the light frequencies incident on them are reflected in the same way.

So, we might think: what would happen if we lit a green carpet with a red, monochromatic lamp? The answer is: we would see this rug in black, since all the light that falls on it is absorbed. Furthermore, if we illuminated it with green light, we would see a great greenish glow emanating from its surface. Learn more about the relationship covered in this topic by reading: Light absorption and object colors.

Through the analysis of absorption and emission spectra, it is possible identify the types of atoms present in stars. In their brightness there are emission bands that correspond to elements such as hydrogen, helium etc.

Electromagnetic waves: what they are and characteristics 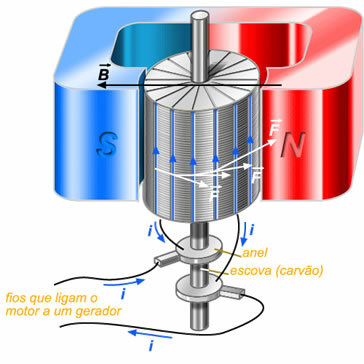 An electric motor is a machine designed to convert electrical energy into mechanical energy. It i...

Isaac Newton, the author of the laws that explain the causes and effects of motion, believed that...