Gametogenesis: where it occurs, types and mental map

Gametogenesis is the process in which male and female gametes are formed. The gametogenesis that leads to sperm formation is called spermatogenesis. The formation of mature oocytes, on the other hand, occurs through the process called oogenesis or oogenesis.

→ Where does gametogenesis take place?

Gametogenesis is a process that takes place in the male and female reproductive systems. THE spermatogenesis occurs in the seminiferous tubules, which are located in the testicles. In the woman, the oogenesis occurs within the ovaries. 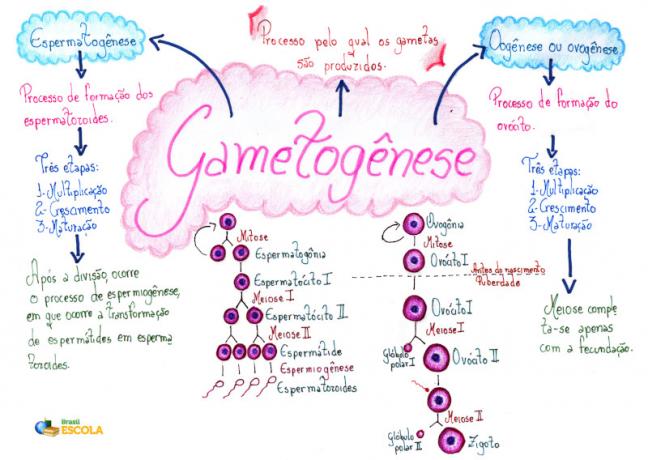 Both spermatogenesis and oogenesis involve processes of

instagram story viewer
mitosisand meiosis(cell division processes). Meiosis, a process that reduces the amount of genetic material, is essential for maintaining the proper amount of chromosomes for the species. As the male and female gametes fuse during fertilization, they must have half the chromosomes of the species to ensure that the diploidy of the species is re-established. 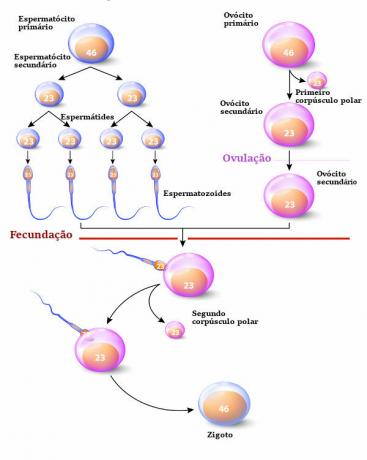 Observe the process of gametogenesis in men and women.

oogenesisit is the process of formation of the female gametes, that is, it leads to the formation of the egg. This process takes place inside the ovaries and takes years to complete. Oimmature oocytes start their development still in the embryonic stage, however, its full development only occurs at puberty, when the secondary oocyte is released (ovulation).

Oogenesis starts from the germ cells, which will divide by mitosis, forming the ovogony. Ovogonias initiate successive mitotic divisions, giving rise to cells that continue to divide by mitosis and others that initiate meiosis and stop its division. These cells, called primary oocytes, remain in prophase I, completing their maturation only at puberty. It is estimated that a girl at birth has 1 to 2 million primary oocytes in her two ovaries.

At puberty, ovarian cycles begin, and a follicle begins to develop with each cycle. The primary oocyte, stimulated by hormonal factors, completes meiosis I, forming two unequal-sized daughter cells (secondary oocyte and the first polar body). The secondary oocyte initiates the second meiotic division, which is interrupted at metaphase. Osecondary oocyte will be released at the time of ovulation, and meiosis II will only resume if there is fertilization.

If fertilization does not occur, the secondary oocyte degenerates about 24 hours after ovulation. If fertilized, the oocyte resumes the second meiotic division, forming the second polar body and the egg.

THE spermatogenesis it is the process of formation of male gametes, that is, sperm. Unlike oogenesis, spermatogenesis is continuous throughout the life of adult males. This process takes place in the seminiferous tubules, which are coiled inside the testicles.

The spermatids then start the process of spermiogenesis, which will lead to the formation of mature sperm. In spermiogenesis, several important processes occur, such as:

After the spermiogenesis phase, sperm are released into the seminiferous tubule.

→ Differences between spermatogenesis and oogenesis

Spermatogenesis and oogenesis are processes that result in the formation of gametes, however, they occur in different ways. Here are some differences between these two processes: 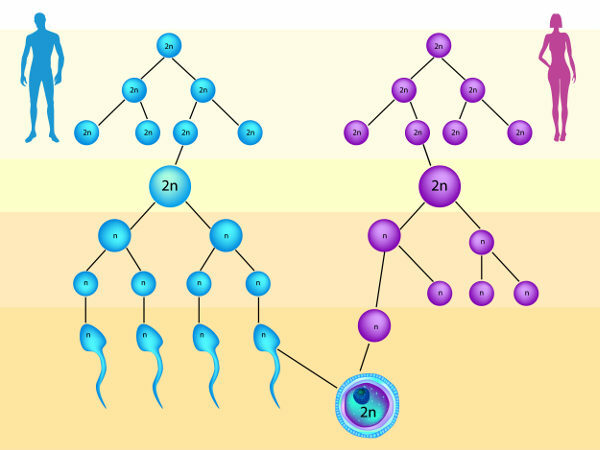 Gametogenesis that occurs in men differs from that which occurs in women.

By Ma. Vanessa Sardinha do Santos

Approximately after the 1960s, the pace of women's lives changed configuration by setting priorit... 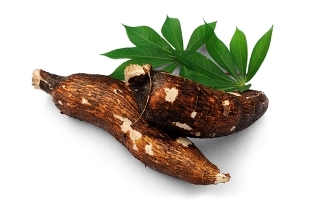 Binomial nomenclature: what it is and proposed rules

We know that there are an infinite number of living beings on the planet and each one receives a ...

O segmentation type that the zygote will suffer is related to the amount of yolk accumulated in ...