The skin it is the largest organ in the human body, covering about 7500 cm2 of an adult individual. This organ protects our body against friction, pathogens, excessive water loss and acts on its thermoregulation. In addition, it contains receptors that allow the perception of pain, touch, temperature and pressure.

The skin has a structure with two distinct layers, the epidermis and the dermis.

O lucid stratum it is found below the stratum corneum, however, it can only be seen in places where the skin is thicker. Its cells are dead, transparent, flattened and anucleated.

At the granular layer, the cells are flat and have keratohyaline granules. Nerve endings reach this stratum.

O germinative stratum, also called the basal layer, contains the stem cells of the epidermis and is its deepest layer. This stratum forms the cells that will give rise to all the higher layers. The cells formed in this stratum are “pushed” to the higher layers, undergoing morphological and nuclear changes.

After the epidermis, we find the dermis. It is formed by connective tissue and in it are located the nerves, blood and lymph vessels, hair follicles, and sweat glands. The dermis can also be divided into layers: a papillary layer and the reticular layer. The papillary layer, the layer just below the epidermis, has projections that fit into the epidermis. The reticular layer is the thickest layer and is made up of denser connective tissue.

Below the dermis, we find the subcutaneous tissue, also known as subcutaneous adipose tissue. This tissue is not part of the skin, but represents the region where the skin joins other organs.

Some structures are associated with the skin: hair, nails, sebaceous and sweat glands. Hairs are structures composed of three parts: the cuticle (outermost layer), the cortex (elongated cells with pigments) and the medulla (only in thicker hairs). They grow in structures called hair follicles. Nails are composed of cells that are very compact and are rich in hard keratin. The sebaceous glands are responsible for releasing an oily substance and are usually located in the hair follicles. Sweat glands are tubular glands that eliminate sweat and are located throughout the body (except lips and glans penis).

How are tattoos done?

At tattoos are increasingly popular with young people, adults and even the elderly. In the United... 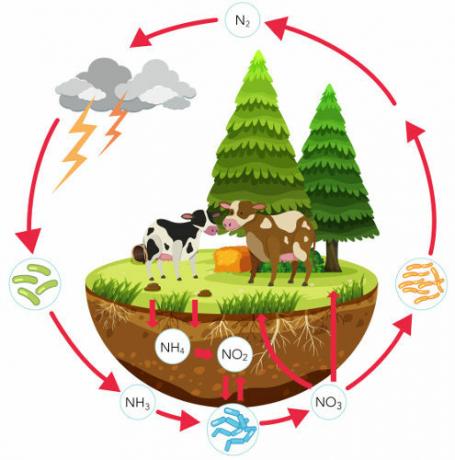 Importance of bacteria for the maintenance of life

When talking about bacteria we usually remember diseases, as some of these organisms are capable ...

Did you know that males can “get pregnant”? Such picture, called Couvade syndrome, or male pregn...