Natural radioactive decay series (or family) it is the set of elements with unstable nuclei, which follow an ordered sequence of spontaneous disintegrations, that is, they emit alpha and beta particles, until a stable lead nucleus is formed.

This means that all natural radioactive isotopes that spontaneously disintegrate in nature come from three radioactive elements, which are: thorium 232 (90232Th), uranium 238 (92238U), uranium 235 (92235U). The uranium 235 series is called actin series, because formerly it was believed that the first element of this family was actinium.

The first element of each radioactive series is called core-parent or parent element; being that the child nuclei or child elements they are all the elements that were originated by the parent nucleus.

See the complete thorium series below:

The uranium and acticnium series are even longer than that for thorium. The most important of these is uranium 235, or actinium, as uranium 235 is one of the main isotopes used as fuel in nuclear power plants and in the manufacture of atomic weapons. 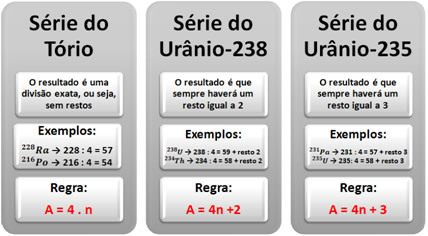 Below we have the percentage of abundance in nature of the three elements mentioned that give rise to each series: 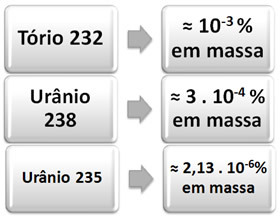 The elements of each series are in radioactive equilibrium, which is called secular balance. This means that as an element disintegrates, forming another, this second element also has its quantity. diminished by its own disintegration, resulting in one that is equal to the amount of natural isotopes for a long time.

However, since the parent elements are not being replaced, it is to be expected that one day they will run out, as well as all the other radioactive elements in the series, leaving only the stable lead.

Occurring between 1990 and 1994, the civil war in rwanda It began when troops formed by Tutsis an...

We think of a few words and then, suddenly, we feel asked about some orthographic questions: is ...

Gestapo: what is it, creation, acting, end

The Gestapo went to Nazi Germany secret police, being responsible for carrying out the persecutio...