Symbols of the Festa Junina

At June parties came to Brazil at the time of colonization, brought by the Portuguese. They are of French origin, so in the dances several words appear in that language.

In arraiais Juninos we can find various elements of popular culture, which reflect the belief of the population of each region. Each of these symbols has a meaning for the party.

THE gang it appeared in the halls of the French court, receiving the name of “quadrille”, but it is of English origin, a peasant dance called “campesine”. At the time of the colonization of Brazil, the Portuguese brought this dance, as well as its main elements: the beautiful and swirled dresses (which represented the riches of the court), the steps taken in the French language (anarriê, avancê, tour, etc.) and the thanks to the saints for the good harvests in the plantations.

O wedding hillbilly makes a satire of traditional weddings. The bride is pregnant and her father forces the boy to get married. The presentation of the wedding on the farm is very funny, as the groom appears drunk, trying to escape from the altar several times, being captured by the bride's father who points a shotgun at him. This has the support of the city delegate and the priest for the wedding to take place. After the ceremony, the bride and groom lead the gang.

THE fire pit symbolizes the protection of evil spirits, which hindered the prosperity of the plantations. The party held around the bonfire is to give thanks for the abundant harvests. Furthermore, as the festival is held in a cold month, it serves to warm and unite people around you. Each saint has a bonfire, the square of Saint Anthony, the round of Saint John and the triangular of Saint Peter.

You balloons Juninos indicate the beginning of the party, but they were created to revere the saints of the party, thanking for the making requests, usually related to dating and marriage, where people meet their peers romantics. Balloons are no longer used, they can cause several fires, falling into dangerous places and destroying nature.

You fires originated in China, also as a way of thanking the gods for good harvests. They are protective elements, as they scare away evil spirits, in addition to serving to wake up St. John with the noise.

O tallow stick it is a game with the aim of earning a sum of money, which is affixed to its top. With this fun, the party becomes more lively, as people have to climb the mast, smeared with grease. Often, participants climb on each other's shoulders, until they manage to get the prize, which ends up being used to pay part of their expenses at the party.

At sympathies they give guests greater luck in love. The juninos saints are known as matchmaking saints, but saint Antônio is the most influential of them. In these practices, the image of the saint is punished, until the person manages to find love.

At Typical foods they are also symbols of June, as a form of gratitude for the abundance in the harvests, especially corn, the party became abundant in their delicious delicacies such as: curau, hominy, pamonha, corn cake, cooked corn, peanuts, paçoquinha, Peeled Mané, among others. 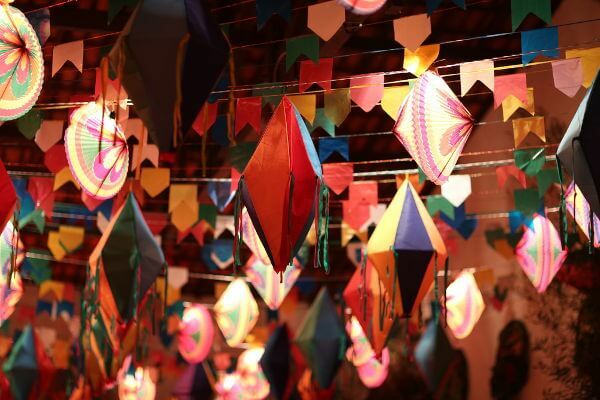 Brazilian folklore: everything you need to know!

O folklore Brazilian is the set of achievements that are part of the culturepopularBrazilian. Wit...