Mol is a unit of measurement used to express the amount of microscopic matter, such as atoms and molecules. It's a term that comes from the Latin soft, which means quantity, and was first proposed in 1896 by chemist Wilhem Ostwald. However, it was Amedeo Avogadro who suggested in 1811 that the same amount of different matter would have the same amount of molecules, which was called Avogadro's Constant.

It was only in the 20th century, after studies by chemist Frances Jean Baptiste Perrin, that scientists were able to determine the amount of matter present in a mole, which is:

Based on this knowledge, it was possible to determine the amount in one mole of any matter or component of the atom (such as electrons, protons and neutrons). See the following cases:


General uses of the mol unit

The term mol can be used for any matter or component of it, but it is most commonly used in the study of quantities related to atoms, molecules and atomic components.

a) For chemical element

Whenever we are working with chemical element (set of isotope atoms), we should use the following expression:

Whenever we are working with a polyatomic substance (formed by the interaction of two or more atoms), which is a group of identical molecules, we should use the following expression:


Relations with the mol unit

As the mol unit is used to express the amount of matter (and matter is everything that occupies a volume and has mass), we can relate the mol of any matter with its mass, just as we can determine the volume (provided the matter is in the gaseous state) that a matter occupies from the mol. b) Mol to volume ratio

When matter is in a gaseous state, we can determine the space occupied by any molar quantity of matter. This is possible because the same amount in moles of gaseous matter always occupies the same space, which is 22.4 L.

It is known that one mole of ammonia has 6.02.1023 molecules of the substance ammonia and that the mass of the molecule is 17 u, thus, in:

From the mole, we can calculate the mass, volume, number of atoms and number of molecules of any substance. See an example:

Example: (FCC-BA) The mass of an acetic acid molecule, CH3COOH, is: (Given: molecular weight of acetic acid = 60 u)

Resolution: The acetic acid substance has the formula CH3COOH and molecular mass equal to 60 u. Thus, we can relate this data to the mol unit as follows:

To determine the mass of a single molecule in grams, just build a rule of three from the expression proposed above, as shown below: 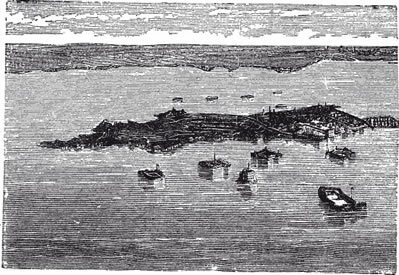 Kronstadt and the third Russian Revolution. The Kronstadt Revolt

One of the facts that generated great divergence about the paths taken by the Russian Revolution ...

You pick up the phone, call the phone company to file a complaint and, on the other end of the li...

Turning the world inside out is very useful when we want to see things from another angle. Breaki...